Experts are uncertain about the way the economy will go - will we return to normal, do we face inflation (plus recession) as in the 1970s, or is it to be a "deflationary depression"?

Deflation is when there is less money (including borrowed money) in the economy. In such a situation, "cash is king". In this article, James Wood argues that the large government financial stimulus will not work, because an even larger amount of money has been lost on the stockmarket and in the housing market. He's talking about the USA, but much the same could be said of the UK (though here on our crowded island, it may be that the housing market does not suffer from quite such an oversupply as in the United States.)

Thinking along the same lines, Robert Prechter offers some recommendations. Here are a few major "dont's":

Prechter is an advocate of the Elliot Wave theory, which tries to fit a pattern onto long-term stock market movements. According to this analysis, the current market recovery is merely a temporary upturn before a long drop to the lowest point in the cycle, when it all begins again.

There are other theorists who have attempted to find cycles. One such is Nikolai Kondratiev (or Kondratieff), who thought he saw "long waves" in the economy, lasting a couple of generations. His followers think we are heading for the low point in that cycle - the Kondratieff Winter. In this time, deflation means that people try to store their money in whatever they consider safe - for example, government bonds, cash and gold. If the cycle is as regular as some would have it, "winter" will end somewhere around 2016-2018 - which is an interesting coincidence, because adjusted for inflation, the Dow Jones Index took 16 years to decline from its peak in 1966 to its bottom in 1982 (according to K's followers, that was the "summer" season). Here is a seductively attractive graphic summarising the Kondratieff cycle (please click on the image to enlarge it): 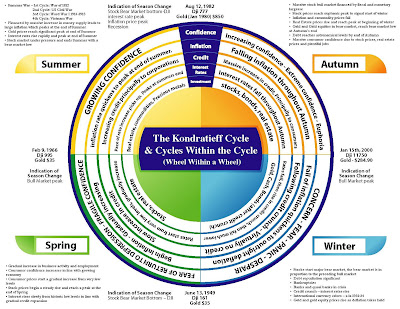 There are a couple of problems with all such attempts. Firstly, the human mind is wonderfully adapted to find patterns, and will find them even in randomness, which is why people once thought they could see a system of canals on Mars. Even if there is such a thing as a long-term economic cycle, there is the question of fit: exactly when will the change come? Once you think you see a pattern, there is the temptation to jam reality into the theory, like Cinderella's sisters trying on her slipper even at the cost of losing a toe or heel in the process.
The second problem is that we are dealing here with human behaviour, and unlike other things in Nature, this subject can take into account the theory that attempts to describe it - and change accordingly. For example, if I say I know what you are going to do next, and tell you, you may then alter your plan so as to prove me wrong. If all investors followed the Elliott Wave theory, they would presumably try to anticipate each other's reactions and that would alter the pattern.
However, these groups of theory-followers are, I think, still in a minority, so maybe the patterns will work, roughly. The contrarian instinctively feels that the way to win is not to follow the crowd - I remember the rich Yorkshire farmer in one of James Herriot's books whose principle was "When all the world goes one way, I go t'other".

DISCLAIMER: Nothing here should be taken as personal advice, financial or otherwise. No liability is accepted for third-party content, whether incorporated in or linked to this blog.
Posted by Sackerson at 09:57

Hey, thanks for the pretty color-wheel! Below the wheel you describe two problems. I'd like to comment:

1. As you say, people tend to look for patterns. But the rare geniuses who find them -- Kondratieff, Toynbee -- are often ignored or belittled for their insights. I think the problem is that people insist on asking, "Exactly when will the change come?" People want to use the patterns to eke out every last dollar of profit. So of course it does not work. If you just use the cycle notions as a framework for general understanding, they can be most interesting.

2. It's true, people can change their behavior in an attempt to foil a prediction. However, the success of that effort depends on the correctness of their knowledge.

There is a good chance that the solutions we establish will only make the problem worse: A "positive feedback loop" in action. My opinion: that's where we are today.

Thanks for your visit, Arthurian, and a happy New Year to you.

Like I say, I think the patterns will work, roughly. And I also think you're right about the self-reinforcing tendency, which is one of the reasons why we get bull and bear phases.