Investment review (and is cash a good investment?)

Reportedly, Swiss-born and Thai-resident investment guru Marc Faber has recently repeated his view that the US cannot escape crisis (e.g. in pension funding) and will be forced to increase the money supply, so further weakening the dollar, at which point, he says, it will become necessary to invest in equities in order to mitigate the effects of inflation. But not yet...

"In that situation you are better off in equities. I am not saying that you should buy equities today. But the dollar will go down, they will have to print a lot of money."

Meanwhile, a sober Australian blogger-commentator opines that the UK may face a currency crisis within the next 3 - 5 years, followed by Japan and the USA (though Portugal, Ireland, Italy and Greece may have their crises before all these three).

Since writing this article today, I have read Steve Keen's discussion of the causes of the Great Depression and how our situation now is worse than it was then. Professor Keen, one of the very few to predict the credit crunch, says:

Panzner picks out a couple of points - the stock market rally is not based on improvement in economic fundamentals, and commercial real estate looks to be a difficult area for some time yet - but Marks concludes, I think a little tentatively, that "most assets are valued about fairly today". This conclusion dovetails with Marks' business, which is sifting and selecting stocks that his company judges are good buys.

Like Panzner, however, I tend to be more bearish - I am part of that "wall of worry" that the American investment establishment is desperate for us all to climb up, or over. It seems to me that, as others have said before, nothing that led to the present crisis has yet been fixed. Some days ago, I looked at the relationship between bank lending and Gross Domestic Product (GDP) in the UK, and I reproduce below a graph I made to represent year-on-year percentage changes in both:

Two things stand out: firstly, the banks consistently increase the money supply more than the growth of GDP, which a monetarist would say is inflationary. Secondly, the general trend since the mid-1970s appears to be a slowing of economic growth, despite all the monetary stimulus. Instead, the extra cash (aka "liquidity") went into a combination of spending on imports (how much of the stuff in your house and on your driveway was made here?) and rising asset prices (houses and shares). Now the tide has turned, unless we're prepared to return quickly to our former reckless borrowing.
A third observation, is that the worst monetary inflation in the last 25 years occurred not under spendthrift Socialist governments, but supposedly prudent Conservative ones (this also holds true for the United States). I wrote a letter to the Spectator magazine to point this out, but they didn't find space for it (perhaps a factor in that decision is that the "Lawson boom" was engineered by a former editor of the Spectator, though the graph above shows the expansion began much earlier than Lawson's 1986 budget; they did print this one, however, which warned of the crash in banking shares).
Another commentator whom I recently referenced, says that the recent US stockmarket recovery is mostly owing to intervention by institutional investors, who own 20% of the market, the implication being that they are trying to encourage the other 80% (the private investors) to join in and, presumably, be fleeced as the former cash-out.
Cycles
A recent study of national economies in the last 800 years (hat-tip to John Mauldin) by Reinhart and Rogoff strongly suggests (as common sense would also suggest) that when debts are very heavy, the economy tips over into recession as we try to repay loans and rebuild savings. Mauldin discounts fears of inflation, because if consumer demand should pick up, there are plenty of resources to meet it. Our problem at the moment is oversupply, which is reflected in the precarious state of airlines, cruise companies, car firms etc - the ad pages tell the story.
Pressure to invest vs. pressure to borrow money
There is pressure to invest, not least because as the populations of developed countries live longer, pension funds have to create more income for the retired. For example, Leo Kolivakis comments on calls for Japan's public pension fund to move money out of bonds and into shares, aiming for higher growth. The fund is worth some $1.4 trillion but only 20% of it is in stocks, about equally divided between Japanese and foreign.
However, according to this source, total world stockmarkets were worth about $46.5 trillion last month, so even if that Japanese fund switched a further 20% into shares, that would only be worth 0.6% of the value of global shares; and even in Japan there are counter-calls to stay safe with bonds. Also, the Japanese are a patriotic lot, and if more of their pension money were to switch into equities (shares) I would expect them to press for a bias in favour of Japanese companies. The effects could therefore be localised, which may be an interesting proposition for the bolder investor.
Even then, there is the question of currency movements. The yen has been held down on the foreign currency exchanges, in an attempt to keep Japanese exports competitively priced, but if Western countries (with all their economic problems) devalue their currencies faster than the yen, it will hit shares in export-oriented Japanese companies. And the managers of Japan's public pension fund must be worrying about this possibility.
Meanwhile, in the USA there has been talk of forcing pension investors out of shares and into annuities, partly (many suspect) because this would create extra demand for Treasury bonds, at a time when the US Government is running out of willing buyers for its debt.
As you can see, there are contrary currents in the oceans of finance.
Will the stimulus money work?
The vast sums loaned to banks have not flowed out into the economy as hoped. Partly it's because banks are still trying to rebuild their reserves (because they loaned far too much during the boom), and partly (I think) because they know that only about half of their losses have been publicly exposed. When the full story is known and its effects felt, there will be more businesses going to the wall. So banks are going to be very careful about who they lend to, and how much; and will charge as much as they can in order to carry on mending their own deficits.
Meanwhile, there's fudging going on. As the Washington Post reported last August, accounting rules had changed in the Spring so that "Under the new rules, banks are not required to set aside money against the portion of a loss judged to be temporary." This appeared to offer a way out of having to show all one's "toxic assets" - all you had to do was maintain (in some plausible way) that valuations would eventually increase again. The catch with a subsequent proposal reported by that Post article, is that long-term loans would have to be fairly valued, i.e. stated as worth what someone else would now pay to take them over. As you may imagine, this has led to much argument and lobbying.
Journalist and investor Charles Hugh Smith thinks we have now got to the end of the line, and the game will play out as follows: a market correction to 6,500 or lower on the Dow Jones Index; a rally up to September; then a fresh, much sharper decline after the November elections "to depths few foresee".
How low could the market go?
Who knows? This is the point at which people start to look for patterns - in the investment world they're known as "Chartists". Back in December 2008, I looked at the progress of the Dow Jones Index since the heady days before the Wall Street Crash of 1929, and adjusted the figures for inflation as measured by the Consumer Prices Index (CPI). Here's the result: 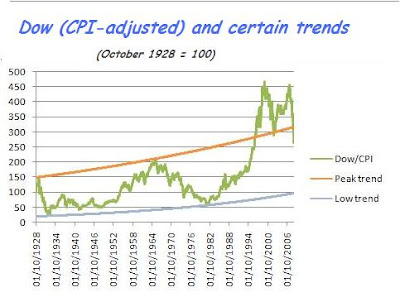 I think it does show the effect of all the above-GDP-growth-rate monetary stimulus that started in the early 1980s. I think monetary inflation explains why the peaks of end-1999 and 2007 were so extraordinarily high; and I fear that it may lead to a correspondingly extraordinary low.
It is a result against which the political and financial establishment will struggle mightily, because it spells disaster for many of them and most of us.
But my cash isn't earning anything!
Oh yes, it is. It may not be earning much interest, but it could be increasing in value, in a way that is particularly useful if you're a taxpayer.
Let's say you've sold an asset for £100,000, and all such assets then drop in price by 20%. You could, if you judge the price to have hit bottom, repurchase for £80,000 (let's ignore dealing costs, please!). Effectively, you've gained £20,000. Had that £80k asset given you income of £20k, that's a 25% return. A 40% taxpayer would be charged £8k, leaving a net return of £12k, or 15%.
But making a "gain" through asset devaluation doesn't get taxed as income, so you enjoy the full 25% tax-free! The government hasn't yet got round to confiscating capital, so enjoy. (That is, until inflation lets rip, in which case you'll probably want to buy things to get rid of your cash.)
Deflation or inflation?
That's the key question, and no-one has the certain answer, and certainly not as to timing. My personal view is that after ups and downs, we will see that we are in a deflationary period, but there is a danger that governments will somehow find a way to expand the monetary base to devalue their (and our) debts. It takes a while for inflation to work its way through the system, so I suppose the danger can be partially averted by keeping a weather eye out for signs of inflation, and then acting accordingly. I don't see inflation as imminent.
Don't blame me!
I'm trying to help you - and clarify my own thoughts - with what I've read and learned. But no-one has that crystal ball - of some 20,000 professional economists, only some 12 foretold the Credit Crunch! - and this is not personal advice to you. The best it can do, is stimulate and inform your own thinking, research and decisions. So, please note my disclaimer, reproduced below and elsewhere.
DISCLAIMER: Nothing here should be taken as personal advice, financial or otherwise. No liability is accepted for third-party content, whether incorporated in or linked to this blog.
Posted by Sackerson at 08:13

Thanks for the tips and information. I won't blame you if anything happens(mentioned at the last portion of your post), besides your article is great. It helps a lot. And speaking of investment, and if ever more money is needed and you have items that have an appraised value, try to apply for quick loans to trusted online pawn shops.