Why a turnaround in the economy is not imminent

"Mish" collates a number of emails and comments to reinforce his thesis that we are set for a long and very difficult deflation, for a variety of reasons. One of his respondents is noted Australian economist Steve Keen, one of the dozen or so (out of perhaps 20,000 professional economists worldwide) who foresaw the credit crunch; Keen thinks it would have been better to give money to debtors directly, rather than to the banks, who will simply hoard the cash as so few now wish to borrow the way they used to.

Vitaliy Katsenelson looks at history and finds: "Over the last 200 years, every long-lasting bull market (and we just had a supersized one from 1982 to 2000) was followed by a range-bound market that lasted about 15 years or so (the only exception was the Great Depression)." He expects the market to bounce up and down and "At the end of this wild ride, when the excitement subsides and the dust settles, index investors and buy-and-hold stock collectors will find themselves not far from where they started in 2000," so he recommends that we analyze individual companies and timing our purchases according to when we think their particular stocks are undervalued.

David Rosenberg tabulates lots of ways in which the present circumstances are not like those in 1982 (when the market began to turn upwards in real terms): 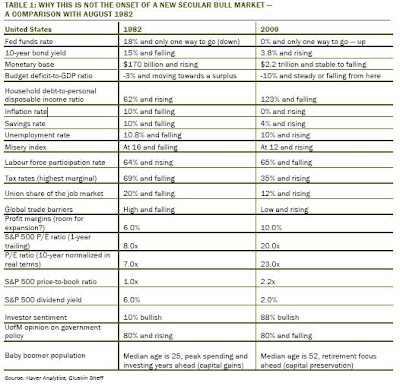 By the way, that last statistic about median ages startled me, so I looked elsewhere for information on general US demographics, rather than just the "baby boomers". This graph says that the median age of the US population as a whole rose from 26 years in 1929 to nearly 30 post WWII, then fell to below 28 in the late 1960s, after which there was a steady rise to over 34 years by 1994. This site estimates the median age in 2006/2008 at 36.7 years. Demographic change has had and is going to have an enormous impact on government budgets and the stockmarket.
Bill Gross (of PIMCO, which recently announced its plan to be a net seller of UK bonds) laments the corruption of government that makes him wary of trading in the US at present. He thinks that relative to more fiscally responsible governments like Germany, countries like the USA, UK and Japan will have higher interest rates and this will, of course, hit the value of their bonds and stocks.
Finally, Warren Pollock's politico-economic overview sees threats to two key stabilisers in the world economy - Saudi Arabia and China. Problems there could begin a wider unravelling of current arrangements.
So, as I have done for the last 10 years or more, I am urging caution and the making of emergency plans.
DISCLAIMER: Nothing here should be taken as personal advice, financial or otherwise. No liability is accepted for third-party content, whether incorporated in or linked to this blog.
Posted by Sackerson at 15:09

"Keen thinks it would have been better to give money to debtors directly, rather than to the banks, who will simply hoard the cash as so few now wish to borrow the way they used to."

Or just use that money to pay off existing debt for people. The banks get the money anyway, but debtors are better off.

Time is of the essence.