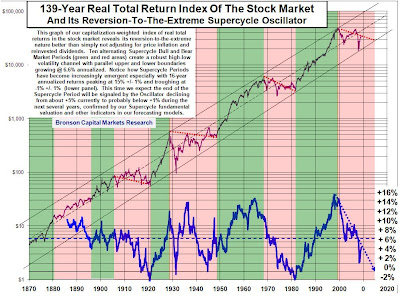 The above chart from here (htp: Global Perspectives) is another of those attempts to perceive underlying order in the apparently random movement of the market and the economy. I've tried the same myself and suggested that the period from 2000 on may be like 1966 - 1982 (the last top and bottom of the market when adjusted for inflation). The interesting thing about the above picture is that the c. 16-year cycle appears to work over a much longer time - starting with the later part of the nineteenth century.

The cycle is not very regular - it varies from about 12 - 20 years - but tends to support my feeling that the real bottom this time may lie in the next 5 - 10 years.

Another quibble is that while some aspects may have a circular form, there are also linear developments that could change everything. One such is China's awakening from its centuries-long economic slumber, with the result that the world's financial centre of gravity is shifting from West to East; another, related to the first, is the unprecedented growth of debt in Western economies. A third is the development of computer technology and lightspeed communications, so that knowledge and expertise that took centuries to acquire can be transferred rapidly to developing economies. What we have lost through folly, we may not be able to regain through hard work.

This is why some commentators have switched their attention to the social, political and military implications of a permanent power shift - from democracies to authoritarian governments of one kind or another. Michael Panzner has tried to follow up the success of his Financial Armageddon with just such a conspectus, but events in the next decades will be determined by even more complex and subtle factors than the ones that led to the crashing end of the twentieth century's money system.

It would be a neat finish to observe that the Titanic had a casino and that the latter didn't have any effect on the iceberg - but (perhaps fortunately for haters of the glib), the ship didn't have a gambling joint. Though there was multimillionaire John Jacob Astor and his cronies, playing high stakes card games in the smoking room.

DISCLAIMER: Nothing here should be taken as personal advice, financial or otherwise. No liability is accepted for third-party content, whether incorporated in or linked to this blog.
Posted by Sackerson at 08:55

Pretty graph. Nice treatment: You have as much respect for the undiscovered future as you do for the apparent order in the past.

Hi, Arthurian, nice to hear from you again. I look forward to the day when I can rename my Bearwatch blog "Bullwatch". In fact, I'm making plans for that - but unfortunately, long-term plans. Still, I don't think it'll be beans and bullets in the UK while we're waiting; in fact, if it is like the 70s, it'll be quite cool in a grungy sort of way - playing Curved Air on the Dansette and drinking Gold Blend with thick-sweatered friends.