A Nationwide Building Society press release (29 April) says the average house is now worth £167,802. Prices rose by 10.5% in the past year. Perhaps we should be in a hurry to buy again.

All the previous three sentences are misleading.

Second, as the Nationwide report admits, house prices are still 10% below the peak reached in October 2007. The good news is that they are more affordable now: using the Nationwide’s online database, here is a graph of first-time buyer mortgage costs as a proportion of average take-home pay in the West Midlands (the most typical region in the country): 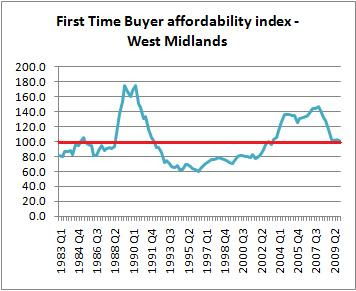 The bad news is, the graph is affected by record low interest rates; the actual amount borrowed is much higher than it used to be. As late as 1998, new mortgages averaged £60,000; now, according to thisismoney.co.uk (25 February), the average new loan is £140,000 – 5 ½ times the median wage, far above the long-term trend (3 ½ times earnings).

Third, we face a long period of economic difficulty, with the threat of high unemployment. A falling pound could result in higher food and energy costs, and if the UK’s credit rating drops interest rates could rise. Each of these factors could easily depress property prices.

You have to live somewhere, but don’t think of it as a money-maker.

DISCLAIMER: Nothing here should be taken as personal advice, financial or otherwise. No liability is accepted for third-party content, whether incorporated in or linked to this blog.
Posted by Sackerson at 12:10