The terrifying truth about debt - and inflation

The above is a recently-released video from the National Inflation Association in the USA (hat-tip: Tim Iacono). In short, it says that the budget cannot be balanced and the currency will eventually collapse. According to the NIA, perhaps a few wealthy investors will prosper from speculation in gold, silver, agricultural land, but the vast majority of Americans will suffer and the middle class will see their savings wiped out by inflation.

This is not a problem restricted to America. According to page 2 of this study by Citibank, the UK will not bring its government debt under control until 2013/2014, and even that is on assumptions that the author sees as optimistic. The second graph shows that compared to the debt-saddled "PIIGS" group of Western European countries, we will take longer than all of them just to be in a position to begin to reverse direction.

Further, the UK is by far the worst of the G7 countries in terms of the debt owed to foreigners, according to this article by Fraser Nelson of the Spectator magazine (and that was back in December 2008). So our economy is at risk from a reassessment of its creditworthiness by foreign lenders and we are vulnerable to a hike in interest rates - which in turn would make it far harder for us to service our debts. True, foreigners have recently shown themselves willing to continue lending to us, but that is against a background of concern about Greece. The picture could change in the intermediate future.

Finding out the true state of affairs with debt is difficult - it seems to be an embarrassing secret. We are given a confusing array of definitions and much of the discussion we hear on TV and radio is about government debt, rather than the total burden of debt within the economy. Even then, we hear talk of "reducing the deficit", which actually means continuing to get into debt, but not quite so fast - the actual total amount outstanding will increase for years to come.

If you want to get some notion of the overall liability, see the graphic on this post at Naked Capitalism: it shows that all in all, we are not much better off than Greece - and Germany is scarcely better off than the UK. The US is a giant debtor - this graph shows the position at the end of September last year: debt was c. 370% of GDP, or half as much again as Ireland's, relative to national income. To put it another way, the US now has 42% more debt-to-GDP than before the Wall Street Crash in 1929.

Even on this definition of debt, experts disagree about the extent of it. Another source (stockbrokers Charles Schwab) agrees on the US figure, and then says:

"The "BRIC" countries (Brazil, Russia, India and China) all have total debt-to-GDP under 160%. However, since this study ended in 2008, we have to add in China's stimulus package, which was three times the size of the US package, not to mention China's banks lending out $1.3 trillion during 2009. Some believe China could now be more leveraged than the United States." (My emphasis.) 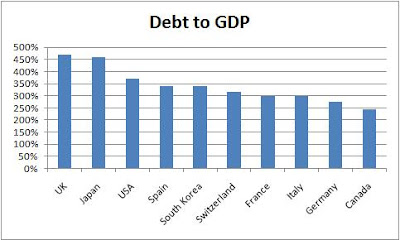 Because of the crisis facing so many nations including the world's wealthiest, there is heavy pressure on their governments to keep interest rates low (or lower than inflation), while they try to shore up their public finances. This means that savers will see the value of their money reduce, even when interest is added to their accounts and not spent. When I worked at an insurance company in the late 80s, we had a sales aid that showed the real (adjusted for inflation) value of cash deposited with the Halifax Building Society for 10 years (from 1974 to 1984, if memory serves). Even with accumulated interest, the sum at the end would only buy half as much as when the cash was first deposited!

Much the same story can be seen with the stockmarket. In December 2008, I made the following graph reinterpreting the Dow Jones Index in the light of inflation: 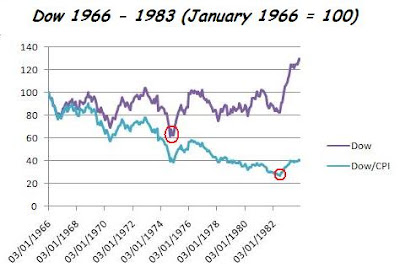 In "real terms" (and yes, one can argue long about what is an appropriate measure of inflation) the apparent recovery in equities was actually a fall in value from 1974 to 1982 - a loss of about two-thirds in eight years. The picture for the FTSE is something similar (though not as severe as in the USA, which was paying for the Vietnam War on top of other problems): apparent gains, undermined by the fall in the purchasing power of money.

The difference between cash and equities is that the latter did eventually bounce back and turn a "real" profit, thanks (in my view) to very significant inflation in the money supply, not under a Labour government (though they did their fair share both before 1979 and after 1997), but under the Conservatives! I've written to people including Lord Tebbit and the economics editor of the Guardian, pointing out the long-running use of monetary inflation to make the economy seem healthy (while weakening it), but perhaps unsurprisingly, have had no response. However, if recent comment (see link just given) on the dimishing returns of monetary inflation are correct, we now approaching the point where further stimulus will actually reduce gross domestic product (GDP) - pumping more money in will be worse than useless.

The fact is, while some compare our situation to that of the Thirties and others look back at the Seventies, the debt problem is now far greater than in either period. The past is not necessarily going to be a good guide to the future. Respected commentators like Dr Marc Faber are coolly convinced that our currency system will simply break down; in which case the social consequences will be very unpleasant.

The challenge now is for you not to make a profit, but to find some way of hanging on to whatever wealth you have managed to accumulate. I cannot advise you personally here on this blog, but do please contact me if you are a client and would like a review.

Nice to hear from you again, Gary.

But this paper (http://www.guardian.co.uk/politics/2010/may/17/liam-byrne-note-successor)
says:

Byrne said the message was meant as a private joke. "My letter was a joke, from one chief secretary to another," he said. "I do hope David Laws's sense of humour wasn't another casualty of the coalition deal."

... or is it one of those "I was only kidding" things you say when you figure the other man's going to hit you?

I believe the UK is squandering it's privilege of owing it's own currency. It's behaving like Greece who really does need to borrow in a foreign currency, yes...the euro.

It's foreign to Greece because Greece cannot print it, it must borrow as California must borrow dollars from tax payers. The UK can print pound sterling (and I do not mean irresponsibly and with reckless abandon.)

The UK very wisely held onto it's sovereign currency for a very valid reason. Have they forgotten why? This emphasis on debt reduction should take a back seat to aggregate demand and employment. Otherwise, the deficit will rise despite attempts to reduce it as tax revenues fall (Deficit=Spending-Taxes)

We are already seeing this happen and the pound is suffering despite austerity. This is the opposite effect when Greece restructured it's debt. Why is that? It has everything to do with the nature of having a sovereign currency.

Greece can rightfully be rated by a credit agency because it actually has credit extended to it in euros. The UK does not, unless the mix of foreign currency reserves dictates otherwise. Tell the credit agencies to get lost, the UK (and the US) have no threat of default in it's own currency, anyway.

Hi, Norman. We may get away with printing more of our own money for a while - I understand that more of our foreign debt is in long-term bonds than is the case with the USA - but surely it must catch up with us eventually.