How bad is the debt problem?

The things we really need to know seem to be the hardest to find out, at least here in the UK. I look again and again for figures on our debt and each time get a different answer.

Sometimes, with public debt, it's because of problems of definition - for example, the "National Debt" is different from the "Public Sector Net Debt". Even then, there's the question of what has yet to be included in the accounts, and what has been designed not to appear in the accounts at all (e.g. the Private Finance Initiative, or PFI). Official statistics say "government debt" in 2009 was almost 70% of GDP. According to this source, the Bank of England put it at 60% in January 2010. But reportedly, the Centre for Policy Studies estimated that the true figure at the end of 2008 was 103.5%, including public sector pensions and PFI. Even the lower, official figure for Public Sector Net Debt is forecast to rise steeply in the years to come, to around 80% (a similar story is told here).

Then there is private debt. A couple of years ago, personal debt in the UK broke above 100% of GDP, according to Grant Thornton. In the USA, private indebtedness has soared to something like 300% of GDP (recently reconfirmed by Australian economist Steve Keen here).

But we also have to factor in business debt. This graph from Moneyweek adds business and private debt together to show the UK's figure running at around 250% of GDP. - and the graph is out of date. It's fair to guess that we're as badly off as the Americans.

Finally, we have to consider who are creditors are. How much of the debt is owed "within the family", so to speak, and how much to foreigners? 18 months ago, the Spectator magazine's Fraser Nelson reported an estimate (by Michael Saunders of Citigroup) of total "external" debt among the G7 nations: 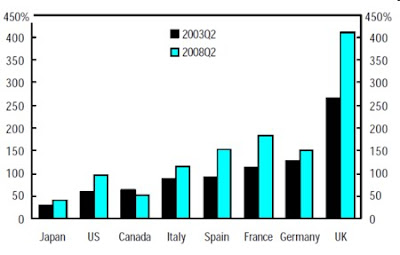 The point of this is that not only are we very heavily in hock, but we are particularly vulnerable to pressure from foreign creditors.

In another post, I plan to consider our options, and the extent to which the recent "emergency Budget" has helped solve the problems we face.

I can only say, Sackerson, that no matter how one looks at it, debt looks like a problem.

Thanks for the Keen link.

Hi, Arthurian. It matters to have the right figures to work with, though. How can we shape public policy when basic facts are so hard to establish?

Trends and tendencies. Perhaps while economists and policymakers are working out the details, they could create some tax incentives that encourage people and businesses to accelerate the repayment of their debt. Broad-brush policies.

Keen and the 15 other prescient few seem to think private-sector debt is the problem. That's a big target. We should be able to hit it.

I'm sure you are right about needing the basic facts. As not-an-economist, the details escape me. But the trends and tendencies are obvious.

Another view from the Economist

Thanks for that, an excellent resource. Golly, Germany nearly as badly off as USA!