The system has become so distorted - some might say crooked, which includes the connotation of cheating - that economists are turning from their financial models to speculate about the future actions of governments.

Even Steve Keen, having come up with a model that shows the economic machine can shake itself to bits, admits that the State can throw a spanner into it first: "There’s a lot more work to do before the model is complete–notably including the impact of a goverment sector that can add its own spending power to a depressed economy."

Now John Mauldin, on his way to the annual Agora conference in Vancouver, notes that even among the pessimists, opinion is divided as to the severity of the economic consequences, and especially as to turning-points.

And as the sovereign debt crisis rolls on, differences between countries get to look more interesting. Mauldin considers the relationship between cyclical debt (owing to periodic upturns and downturns in the economy) and structural debt - the type that demands long-term cutbacks in spending. Hearteningly for any Italian readers, their nation doesn't look too bad, especially when (as he points out) it will be so easy to save money, for example on official Maseratis.

But after looking at the US, just look at the state of the UK. I fear that our new and amicable coalition government is asking us to clap hands to save Tinkerbell. 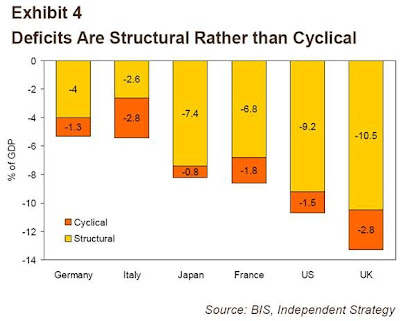 DISCLAIMER: Nothing here should be taken as personal advice, financial or otherwise. No liability is accepted for third-party content, whether incorporated in or linked to this blog.
Posted by Sackerson at 09:23