The present crisis is as much psychological as fiscal. That's not to say that it's not real - psychological stress can result in behaviour that is very real and destructive. But talk of financial limits ignores the fact that the limits are elastic.

I'm reading Simon Schama's Book "Citizens", which is about the French Revolution. He points out (p.65):

"Not only do we now know that the British per capita tax burden was three times heavier than in France, but by 1782, the percentage of public revenue consumed to service Britain's debt - on the order of 70 percent - was also considerably greater than the French equivalent."

The UK's GDP is now an estimated £1,410 billion, of which about half runs through the government's fingers. On average the interest rate on government debt is 4.3% (until we have to renew loans) and last year the forecast was that the debt would rise to some 100% of GDP. So long as we can carry on rolling over the debt, the main thing is to be able to afford the interest, which on this showing would look like being about 10% of government revenues.

Returning to Schama, he says (p.79) that in 1788 the French government debt servicing was close to 50% of its revenues - still well below what Pitt had to deal with in 1782. But in France, there was mounting resistance from the tax-farmers and foreign creditors, and the high rates the government was going to have to pay to attract additional capital triggered the crisis - which had implications for rich tax rebels that they hadn't expected. Oo-er.

We've had much worse public debt before now, even in the 20th century - see the graph below. It's not "can't pay" that will determine the course of events here, but "won't pay". 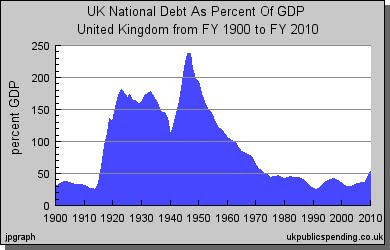 One thing that's different, and isn't shown here, is the additional component of private debt. Unlike government borrowing, private loans are usually expected to be paid-off, so the cost of debt servicing for the private individual is much higher. And if a lot of this debt is tied up in property that is gradually reducing in value, so that the debt may eventually outweigh the asset, the consumer-voter will be building up a head of resentful steam. Then there is the debt accumulated by companies and the financial sector. It all adds up: the graph below (from this site) compares the US and UK economies in terms of the total burden of debt-to-GDP: 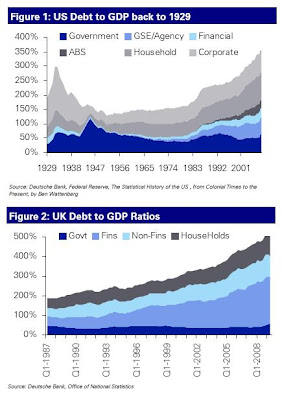 Another difference is that the crisis is now global. The US and the UK are in serious difficulty, but so are many European countries and the European banking system that has tried to hold them up; and the increasingly productive East has become dependent on the profligate West.

Historically, says Schama, the pre-Revolutionary French government would partially default on its borrowing (e.g. the 1720s, and in 1770), as well as raise more taxes and find more lenders. Now, we seem to be trying hard to avoid default (perhaps because once it started in one place, there'd be so many following suit); taxation of various kinds is already taking well over 40% of our income, in return for a creaking system of benefits and services; and where are the lenders who will take on so much global debt? And if they do, at what price?

Yet international finance is so murky, anything could happen. Towards the end of Andrew Rawnsley's book on New Labour, "The End of the Party", he says (pp. 626-7) that at last year's G20 summit "it was reliably estimated that more than $10 trillion of private wealth was concealed in paradis fiscaux [tax havens]". I don't think it's all invested in BP shares. Maybe it's waiting for governments to come to heel; to co-operate with each other in some glum global deflation that will further enrich the "oofy", as P.G. Wodehouse would term them.

"If we decide to believe the money economy still exists, and that debt is indeed wealth, then we damned sure know where to go looking for the wealth. Globally, forty percent of it is in the paws of the wealthiest one percent. Nearly all of that one percent are connected to the largest and richest corporations. Just before the economy blew out, these elites held slightly less than $80 trillion. After the blowout/bailout, their combined investment wealth was estimated at a little over $83 trillion. To give some idea, this is four years of the gross output of all the human beings on earth. It is only logical that these elites say the only way to revive the economy, which to them consists entirely of the money economy, is to continue to borrow money from them."

Or as humorist J. B. Morton (aka the Daily Express' "Beachcomber") put it in his “A Dictionary For Today”, long ago:

“WORLD-PEACE: A state of affairs which would make it possible for the international moneylenders to get even more power than they possess at present.”

It's there to be taken from us: for except among the very poorest, there is so much wealth we still have, such a high standard of living. In the early 80s, businessmen strode into our insurance office with mobile phones the size of bricks tucked proudly under their arms; now, the primary-age children of the underclass have iPhones that my fingers are too fat to operate.

Underneath the polemic of many of the doomsters who now write on the Internet is, I think, a hope that in some way disaster or revolution will save us, because they cannot see us deliberately planning and achieving a better state of affairs. I think this is a dangerous line for the imagination to take: we might find we'd burned what we thought was the Phoenix, but were unable to resurrect it.

But change of some kind is certainly on the way, and in the course of it we must remember to hold onto the things that really matter, especially civil liberties and the democratic form of government. Perhaps the biggest mistake is for us to think that money is the main issue.

The Economist compares drinking alcohol to a "debt boom" ["A Special Report on Debt, 24 June] ... Milton Friedman compared drinking to inflation [Free to Choose, chapter 9] ... All I can say is, I need another drink!

Excellent post, Sackerson. Good graphs, good quotes, and your last sentence sent chills down my spine. (And wow, you guys have a lot of financial debt.) But this, this -- "Underneath the polemic of many of the doomsters who now write on the Internet is, I think, a hope that in some way disaster or revolution will save us, because they cannot see us deliberately planning and achieving a better state of affairs." -- I would love to talk with you about this.

Hi Art, and fire away. What I'm thinking re the bit you quoted is that there is a self-aggrandizing tendency to think that the end of the world is nigh, which kind of ties in with one's own mortality and somehow makes the latter more meaningful, e.g. when I was a teenager we'd write poems about the threat of nuclear war.

Take James Kunstler: very sparkly prose style, but through it you sense a relish in contemplating the end of the corrupt old order, which will be replaced by an energy-efficient, sunny, bike-riding, low-food-miles happyocratic New World. In its way it's the sort of fantasy promoted by Communists to justify the awful things we must regrettably do before we get there, only here it's simply inevitable and we don't have to do anything to make it happen, so no guilt.

Fact is, when the money system broke down in Germany in 1923 and Hungary in 1946, the history books don't conclude their accounts with the sentence "As a result, everybody starved to death". The worst things that happened in Germany were what people decided to do about the collapse, in particular to look for a strong leader - ah yes, what we all need.

So ignoring the Doomsdayists and the Bright New Worlders, we should look at the social and political ramifications of what is undoubtedly major financial change. Growing inequality, increasing unemployment, and a State more determined to keep tabs on the populace. Money meltdown has been prevented, but civil liberties and the democratic system are definitely threatened. We've all (or most of us) been a lot poorer materially before now, but our birthright (even in the UK) is the expectation of liberty and the rights and intrinsic, inalienable worth of the individual.

The US has an advantage in that this eighteenth-century vision of man and society was preserved, crystallised, installed in the Constitution, and there'll be a hell of a ripping sound if someone tries to tear it out. The UK's constitution is much more liable to change and so while the biggest noise comes from America, the biggest loss may be ours - if we don't fight for the Rights of Man.

As a financial adviser (while there is much of a financial system left), I try to defend the little wealth of my clients - property rights are part of the R of M - but as I say, at the end it's not really about money. Once a basic minimum has been achieved, the material aspects of life are less important than the social.

What good would all the money in the world be, if you were the last human being on earth? That's a question I'd like to ask the 1% who own 40% of everything. I suspect many of them are gripped by a kind of madness.

It seems to me that inequality has never stopped increasing its just been appeased by easy credit based on the false assumption that house price inflation was real money. Wages didn't increase fasted enough to justify the consumption that kept corporate profits high so the slack was filled by credit. At some point this seems to have turned into ponzi economics.

Your statement "Underneath the polemic of many of the doomsters who now write on the Internet is, I think, a hope that in some way disaster or revolution will save us, because they cannot see us deliberately planning and achieving a better state of affairs."

I think is spot on. To me they have a point but there seems to be a relish or disregard for the social upheaval and consequences of such a revolution.

Personally I do hope we are capable of "deliberately planning and achieving a better state of affairs" but what ever that route is it needs to be different to what's gone before.

Well my only suggestion is to not get here in the first place.. Thanks for the google tip.