When will the bear market end? How bad will it get?

Tim W. Wood at Financial Sense reckons the last bull market ran from 1974 to 2007 (extended by government interference or support, depending on your point of view). His research tells him that bear markets last one-third as long as the preceding bull market, so he sees the present stockmarket rally as a "dead cat bounce".

That's my gut feeling, too, though I'm aware of the dangers of confirmation bias.

Below, I give two charts showing the course of the Dow from August 1929 (close to its pre-Crash peak) to August 2010, 82 years later. The first shows the raw index, which as you see only breached the 2,000 mark in the late 80s, making the last 20 years look freakish. 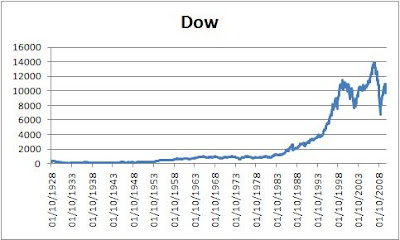 The second adjusts the Dow for inflation as measured by the CPI, so we can see where we are "in real terms" in comparison to the great speculative bull market of the late 1920s. Note that the recent low point (March 2009) is above the high point of the bull run that ended in January 1966, whereas the low of June 1982 was less than 40% of the 1929 peak. 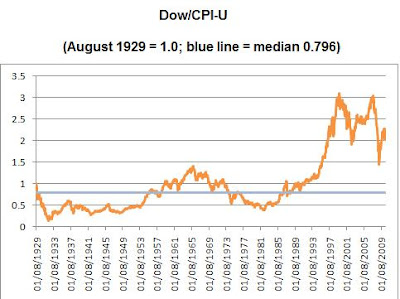 If the eventual market bottom this time has the same relationship to the 1966 peak, as 1982 had to 1929, the Dow should go below 5,200 points (adjusted for inflation between now and the future low point).

So much has changed over the last 3 generations that the attempt to turn historical data into predictable cycles may be fruitless. On the one hand, debt is now an even greater burden than in 1929; on the other, big companies are multinational and the fortunes of Wall Street are less bound up with those of Main Street.

Yet global trade means that the fortunes of sovereign nations are increasingly interconnected, and while China is set to overtake Japan in size of economy, it is also (apparently) heading for a Western-style banking bust; should China choose to raid its overseas investments to tackle such a crisis, then the American markets (where China holds over $1 trillion of assets) are in trouble.

I still feel that a major breakdown is on the way, I just don't know exactly when. It's like waiting for the Big One in California: every day it's "not today", yet it's never "never".

DISCLAIMER: Nothing here should be taken as personal advice, financial or otherwise. No liability is accepted for third-party content, whether incorporated in or linked to this blog.
Posted by Sackerson at 08:36