Too much wealth tied up in houses

A release from the Office for National Statistics, widely reported in the papers today, says that the UK's net worth is £6,669 billion. Of this, 61% (£4,048 billion) is tied up in housing.

Much of the value of housing depends on the inflationary effect of lending. According to a release by the Council of Mortgage Lenders, in May 2010 the average loan to value for first-time buyers was 75%, and for house movers it was not much less (67%).

Housing has become a far more important element in our economy, over the last 50 years. Here is Table 1 of a press release by the Halifax in May 2010: 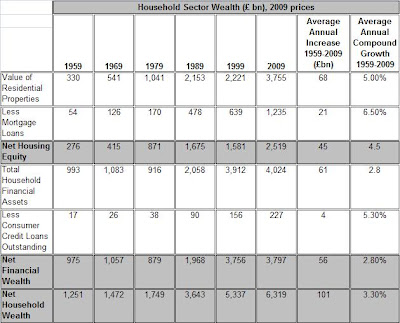 Since 1959, total net household wealth has increased 5 times in real terms. But houses have gone up in value 11 times, and mortages are 23 times bigger. Consumer credit is also 13 times greater.

I don't think we can really run a successful economy on the basis of inflating the value of our huts by getting into hock with moneylenders. Sooner or later, we have to get out there and hunt something.