Could shares protect against inflation?

It is well-known that German money became worthless in 1923, thanks to hyperinflation. The value of cash savings was wiped out; fixed rents also became worthless, which benefitted the ordinary person; but practically all one's income was spent on food, instead (see Table 6 at the bottom of this page).

What is less well known is how investors who didn't have to sell their shares actually gained, after a market pullback. 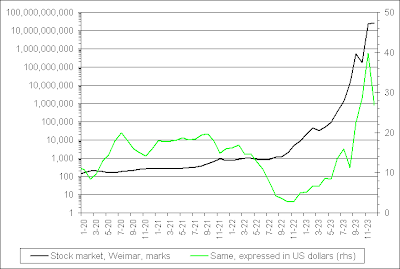 UPDATE: As Michael Panzer points out, what I called a "pullback" should more properly be termed a horrendous crash! Unless you have the titanium nerve to hold on through such an event, there is a grave danger that you could buy in now and sell in a panic later and lose most of your wealth.

CLARIFICATION / CORRECTION:(I should have made it clearer that the graph above is not mine - it comes from the site I linked to in the text, i.e. Now and Futures. Apologies for any misunderstanding, which I didn't intend.)