Will commodities protect investors in a major crisis?

John Butler fears that we will be overwhelmed by debt and governments must - perhaps should - default. In his Financial Sense article "A Century of Money Mischief and the Rising Sea of Debt" he looks to commodities as the Ark that will save us from the flood:

Everywhere you look, there are increasing risks to currencies, sovereign bonds, corporate securities and financial assets generally. The problem is, as pointed out above, there is just too much credit risk in the world and investors demand that it be reduced, by crisis if necessary. But how to avoid taking credit risk when even sovereign debt is at risk of default? When the world’s reserve currency, the dollar, is being deliberately devalued? There is only one asset class that has zero credit risk or devaluation risk: Unencumbered real assets. While in principle this includes property owned free and clear, with banks still on the hook for massive losses in residential and commercial lending, most of which are still not marked-to-market on balance sheets, we think it is too early to venture back into the property market. A much safer alternative is liquid commodities that can be traded for other goods, or services, all over the world. These cannot be defaulted on. They cannot be devalued by central banks or governments. As such, in a world of unstable currencies and financial markets generally, a well-diversified basket of liquid commodities provides the best available store of value until the reduction in credit risk has run its course, one way or the other. As global debt levels are still rising, we have a long, long way to go yet.

In the long run, he may be right. But although commodities tend to rise in value in the buildup period, the liquidity shortage when the crisis hits forces them down with other assets, as we see from the events of 2008: 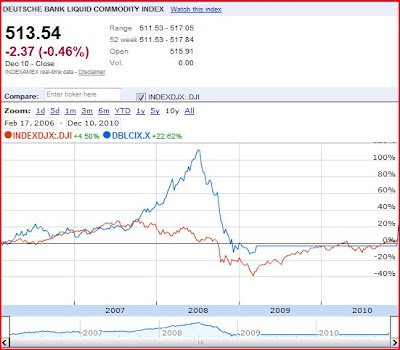 In the above chart, we see that the Deutsche Bank Liquid Commodities Index rose while the Dow fell, then collapsed, almost closing the gap. This suggests that a potentially very profitable strategy for the nimble and daring, would be a switch to cash just before the dam breaks. That still assumes a degree of normality, and I'll say a little more about that in a moment.

Meanwhile, how is the DBLCI doing now? It's nominally around where it was in the Summer of 2007 and has been trending up from its low of December 1, 2008. But allowing some adjustment for inflation, it seems to be indicating, not a crisis, but a slow recovery from crisis. 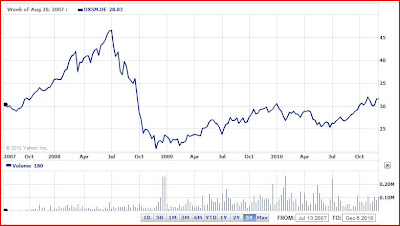 That's not to say that a fresh catastrophe is remote, but we have to remember that the worst part of the 2008 crunch was the moment when interbank lending broke down. Now that governments have established a policy of supporting the banks (or at least, their favoured ones) at all costs, the next blow is more likely to come from a different direction; maybe in the form of a breakdown in Eurozone intergovernment lending.

Or perhaps we may see the sort of sovereign default that Mr Butler urges; but this could spread in a way that might make conventional investment strategy irrelevant. And default is a more brutal and naked form of cheating others than the slow embezzlement of inflation. What will those who stand to lose the money they've loaned, do about it?

It seems to me that some financial commentators are like those people who stood still and stared at the pretty white line on the ocean in the 2004 tsunami, unconscious of the need to move immediately; or like the farmers who grudgingly gave my refugee grandparents shelter in their barn in 1945, not dreaming that a couple of days later the Soviet Army would overtake them also.

Instead of a market readjustment, with winners and losers in a system basically unchanged, we may be facing a reordering of world affairs, one that may not have a comfortable place for ourselves personally. If Mr Butler is right in comparing debt to global warming, we must hope for the financial equivalent of the Kyoto and Cancun Summits.