How will we stay rich?

Not many of us feel rich, but that's partly to do with who we have around us. Compared to most of the world, we are hugely well-off.

Let's make the comparison a little fairer. What matters is not only how much money we have, but what we can buy with it locally: this is known as "purchasing power parity" (PPP). So, here is a graph of the GDP per person (in PPP terms) of the most populous nations on Earth; I also include bars for the European Union and the world average (click to enlarge):

The vertical axis is in multiples of world average GDP: 11,800 US dollars. You see that the USA is four times as wealthy, Germany and the UK three times, and even Italy and Spain are doing terribly well, for now. Until recently, Greece (not shown) wasn't far behind Italy.

My question is, what's keeping us there?

If these countries were a series of locks on a canal, and all the gates were opened at the same time, you'd expect a lot of turbulence and then a settling-down to a uniform level throughout. We have world trade, so why shouldn't national wealth average out across the globe?

It is perfectly possible for neighbouring countries to have extreme disparities in per capita income - here's the two Koreas, separated only by a demilitarized zone around the 38th parallel: 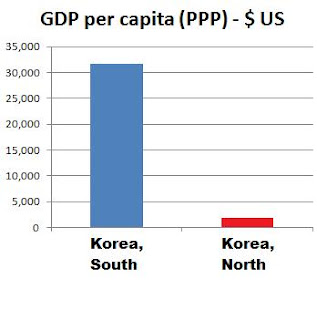 Clearly the economic divide here is largely owing to very different economic and political systems. North Korea may not really be a threat to the world, but it's certainly a threat to its own unfortunate citizens, 150,000 of whom are kept in labour camps in scarcely believable misery. So yes, that inequality can be maintained given sufficient vigour and brutality on behalf of its rulers, who must continue to oppress because they have a tiger by the tail and a moment's weakness will finish them.

At $1,800 per capita, North Korea is far from the poorest country, according to the CIA World Factbook: Bangladesh, Kenya, Zambia and 30 other nations (mostly African) have less, bottoming out with the Congo at $300 (i.e. spending power about 82 cents a day).

But what, other than military dictatorships and civil and international war, accounts for some countries' failure to rise, and what prevents our own standard of living from falling?

Do we work harder?
Are we cleverer?
Are we - will we remain - better educated?
Do we have better and wiser rulers? Do they rule in the nation's interest?
Do we have special knowledge that nobody else can duplicate?
Is our basis of industrial skills thriving?
Are we using our human resources - our talented people - to best effect, in the best sectors of the economy?
Is it easy for our enterprising people to start up and run businesses?
Can we trust our money, and our banks?
Can we live forever off our patents - will they always be ours, and their validity accepted everywhere?
Are we blessed with inexhaustible natural resources?
Are we militarily strong enough to dictate terms of trade and hold everyone else down?

Not enough "yes" answers to the above, I fear.

DISCLAIMER: Nothing here should be taken as personal advice, financial or otherwise. No liability is accepted for third-party content.
Posted by Sackerson at 17:19

Great site! I'm trying to find an email address to contact you on to ask if you would please consider adding a link to my website. I'd really appreciate if you could email me back.

Thanks and have a great day!

I've put up a criticism of Theodore Dalrymple's article at my place. As you say to contact you via comments that's what I'm doing. I'd be delighted to hear what you have to say.