Lovers of liberty are naturally and rightly suspicious of governments, which, as Charles Lamb said, "are as bad as they dare to be."

But corporations can be just as big and as hard to restrain, especially since they have the money to attract some of the best talent, and can shop around the globe for their preferred legal and tax jurisdictions.

Wikipedia lists 185 companies that have revenue in excess of $50 billion per annum. The CIA World Factbook lists 220 countries and dependant territories, together with their estimated GDP. Combining them into one list of major economic entities (ignoring the EU, which is not a country), we find:

1. Companies represent 40 out of the top 100 entities.
2. Only 23 countries are bigger than Exxon Mobil; and the latter's turnover is bigger than the combined GDP of the 100 smallest nations.
3. Even the smallest company listed here, Best Buy, has revenues higher than 183 nations.
4. BP has more employees than the populations of any one of the smallest 43 countries.
5. The combined revenues of the US housing quangos Fannie Mae and Freddie Mac total $264 billion, more than the GDP of Singapore.
6. The third biggest company, Walmart, is the 30th largest economic entity here and has more turnover than South Africa.
7. The 29 oil-and-gas companies on the list have a combined revenue exceeding $4.5 trillion - more than all but the three highest-GDP countries.
8. UK shoppers will be interested to see that supermarket chain Tesco ties at #100 in the list below - and its position may be strengthened if some of the banks, insurers and car companies suffer a reversal.

As multinational businesses have become larger (and often freer in their financial dealings) than many of the world's nations, our attention must turn to the growing power and potential dangers of corporate enterprises, as well as of the corrupt and tyrannical political regimes which sometimes work in partnership with them. 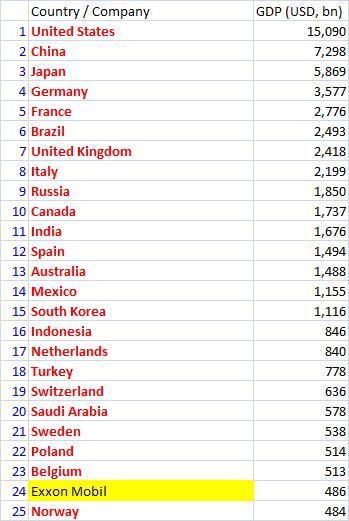 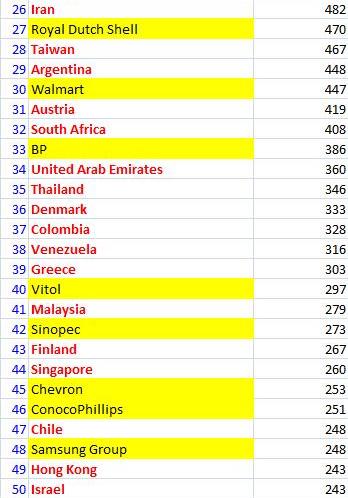 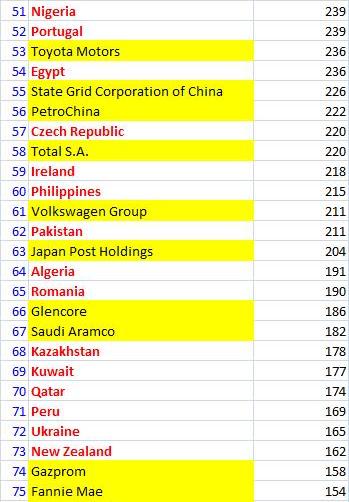 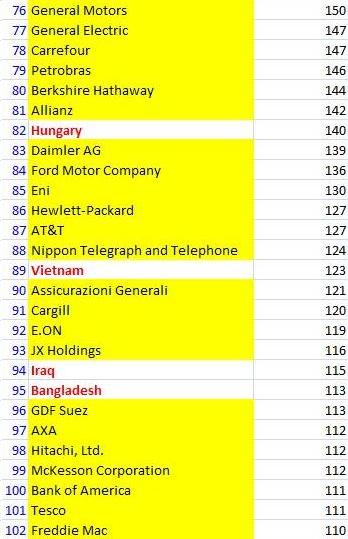 DISCLAIMER: Nothing here should be taken as personal advice, financial or otherwise. No liability is accepted for third-party content.
Posted by Sackerson at 18:58