Is there enough cash to support the markets?

I was struck by comments on King World News from Egon von Greyerz of Matterhorn Asset Management, regarding global asset allocation:

In chart form, this is what that looks like: 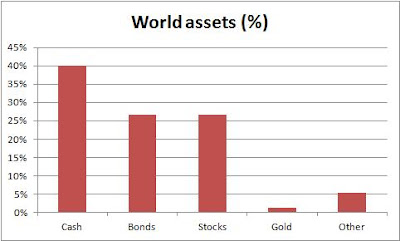 That looks like a lot of cash to me.

In﻿ our developed economies, it's said that only some 3% of total "money" is in the form of notes and coins, so as long as there's enough electrons to whizz round the wires the system can operate.

Where does the rest go?

In poorer countries, presumably more money is in tangible form; but worldwide there must be a lot lying fairly idle in bank accounts, daydreaming about whether it's a wave or a particle.

From that, two further questions occur to me:

1. Government deposit protection schemes have fairly low limits (from a rich person's perspective), and many banks are thought to be very shaky. Where do the rich park their cash? Is there a select group of supersafe banks, and if so, details please.

2. Some investors - such as John Burford - are waiting like trapdoor spiders for a major market decline, so they can rush out with the cash in their war chest and grab assets at bargain prices. But if there are hordes of people like him, but with zillions more to play with, then potentially there's so much support that we won't see a crash happen for long enough for ordinary investors to get in. Instead, there'll be a lot of fast trading and large sums will be won or lost on fleeting and marginal differences in a thin market. In other words, something like what is happening already.

There's another aspect that may have altered the character of the markets, which is the growth in wealth inequality.

When a small fraction of the populace owns most of the financial assets, it's running out of middle-class suckers to fleece. As the supply of victims dries up, there is little incentive to participate in the market; and if one has enough wealth, one doesn't need to surrender much of it to pay the bills.

So unless the wealthy are addicted to gambling, I'd expect them to let their portfolios quieten down; in fact, they're probably wondering why their investment managers are charging quite as much as they do, and whether they really have to keep turning over the money and incurring dealing charges and fees each time.

Besides, there's more fun ways to gamble. Oz billionaire Kerry Packer is said to have challenged a Texan millionaire double or quits on the latter's entire $60 million fortune, on the toss of a coin. Whether he'd have offered the challenge on the basis of risking all his own, I can't say.

DISCLAIMER: Nothing here should be taken as personal advice, financial or otherwise. No liability is accepted for third-party content.
Posted by Sackerson at 14:12