US money velocity at historic low 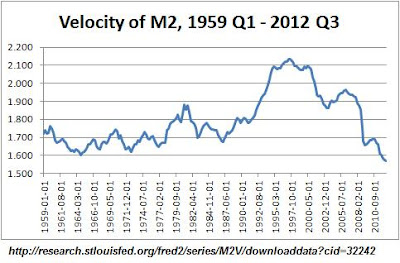 Roughly speaking, for every 4 dollars spent at the end of the last Millennium, Americans are now spending 3.

But the money supply has not grown sufficiently to make up the shortfall (online figures only start from early November 1980, but the pattern is clear): 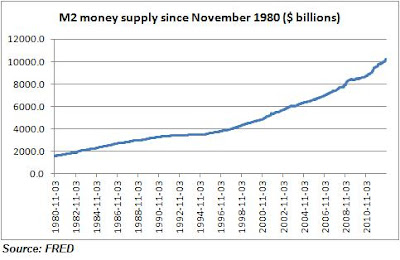 M2, the Fed explains, is a broad measure of money held by households, so in its way it reflects the state of the real or workaday economy.
The latest figure for M2 is $10.2 trillion, up from $4.03 trillion at the end of 1997, a year in which GDP was $8.33 trillion. If money velocity had not changed, current GDP would be not $15.78 trillion as it now is, but $21.8 trillion - 38% higher.
Quantitative Easing (not included in M2) is not to stimulate that kind of growth, but to avert or mitigate disaster.  So far, according to the November issue of Forbes magazine, $3.3 trillion has been poured into banks and quite a lot from there into the government, just to keep things going, but Mike Whitney of Global Research reports estimates of $4 - 10 trillion more needed. Even then, the cheap cash may be shoring up stocks and bonds, but is doing little to stimulate demand or support those who try to meet it.
The much-maligned Federal Reserve is buying time, but the question is whether anyone is doing anything useful during the reprieve. Governments of both parties have spent 30 years encouraging banks to funnel money into homes - largely unproductive and illiquid assets - and the drag of debt has finally slowed demand to a halt.
Meantime, productive capacity has been haemorrhaging Eastwards, and the pool of labour skills in the US are in danger of decay. Even if much consumer and real estate debt were forgiven now, it would be a challenge to rebuild and restaff factories; but all that, I think, is what has to happen.
INVESTMENT DISCLOSURE: Mostly in cash (and index-linked National Savings Certificates), but now planning to build up some reserves of physical gold via regular saving.

DISCLAIMER: Nothing here should be taken as personal advice, financial or otherwise. No liability is accepted for third-party content.
Posted by Sackerson at 15:45

GDI Global Domains International offers great way to earn for senior member from the home just go to freedom.ws/webincome5 and use username webincome5 as access code to learn how to earn extra income for lifetime without any investment.