Does the stockmarket correlate with energy usage?

I've suggested recently that not only does modern money fail to act as a store of value, it is failing as a unit of account because of central bank/government interference in its quantity and distribution. It's an elastic ruler and its unreliable measurements are a factor in unsatisfactory decisions (misallocation of resources, as the monetarists say). So we look for alternative ways to assess relative advantage.

One more scientific-seeming (but complex) measure is energy. Professor Charles Hall adapted the notion of energy return on (energy) investment (EROI, or EROEI) from the biological sphere (where he began his studies) to human social-economic systems. This appears to be a promising method for analysing different forms of commercial energy production.

However, the entry linked above goes on to claim a correlation between the stockmarket and energy usage:

... a century's market and energy data shows that whenever the Dow Jones Industrial Average spikes faster than US energy consumption, it crashes: 1929, 1970s, the dot.com bubble, and now with the mortgage collapse.

I'm not so sure, and I've had a look for the evidence. So far, I've come across a study by the US Energy Information Administration of oil futures vs stock and other indices, and over the admittedly fairly short period covered, the correlation with the Dow is not uniformly high, though it has increased since the Credit Crunch: 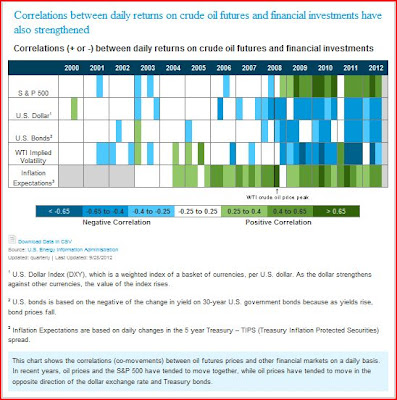 Granted, energy usage and energy prices are not necessarily tightly bound together, but does the above tend to disprove or prove the assertion that the Dow cannot long outrun energy use?

Nothing here should be taken as personal advice, financial or otherwise. No liability is accepted for third-party content, whether incorporated in or linked to this blog; or for unintentional error and inaccuracy. The blog author may have, or intend to change, a personal position in any stock or other kind of investment mentioned.
Posted by Sackerson at 17:43