Fighting the Government for savers and against inflation (1)

I am going to return to the fight on National Savings Index-Linked Certificates. As background, I give below the text of some of the relevant emails between myself and my Member of Parliament, Mr John Hemming (Liberal Democrat member for Birmingham Yardley):
11 June 2012:
Dear Mr Hemming
As one of your constituents, I should be grateful if you would ask questions in Parliament re the Government's intentions in respect of preserving our life savings against the ravages of inflation. This is especially a matter of concern because of continuing enormous financial support for the banking system, here and in other countries (latterly Spain) that seems destined to burst out as high inflation at some future point.

I note that Mr Cameron's private secretary has written recently to all members of the Cabinet saying, among other things:
"The Prime Minister wants to ensure that the Government as a whole is giving the highest priority to addressing the cost of living."
(http://www.dailymail.co.uk/debate/article-2157018/Cameron-summits-quads-secrets-save-EU.html)
If this is so, why did National Savings & Investments withdraw Index-Linked Savings Certificates from sale on 19 July 2010, when they had previously been continuously available since 1975, a year in which RPI was 24.2%? Is this an indication that the Government expects RPI to be even worse than that figure in the intermediate future?
And why were these Certificates, somewhat grudgingly reintroduced (5-year term only) on 12 May 2011, withdrawn again on 7 September? Why are they not available now?
It is also worrying that the Government's 2011 Budget Plan (as given in Red Book Annexe B, page 90 - http://www.direct.gov.uk/prod_consum_dg/groups/dg_digitalassets/@dg/documents/digitalasset/dg_196165.pdf) says "National Savings and Investments (NS&I) is expected to make a contribution to net finance of £2 billion."
Is this a sign that the Government is purely concerned about targets for government borrowing and not at all exercised about the protection of HMG's subjects' money savings, which in many cases have been built up slowly and with difficulty over many years. Why should simple savers have to accept risks to the real value of their deferred spending, as though they were speculators?
Is the Prime Minister's leaked pronouncement a misleading dog-whistle to the electorate, or is he really willing to put our money where his mouth is?
Yours faithfully
Answer (same day):

I will write to the chancellor about this.


Dear Mr Hemming
May I ask whether the Chancellor has responded on this matter, and if not, when and in what terms did you write to him? Surely he cannot disregard the issue?
Answer (same day):
I will chase for a response.


Dear Mr Hemming
As you have now asked the Chancellor twice for a response on inflation-protected savings, without success, may I respectfully request that you table a Parliamentary question to be asked at the first available opportunity?
Yours faithfully
Answer (same day):

No problem. The first opportunity will be in September. I will ask my researcher to work on drafting that with you.

I was not contacted by Mr Hemming or his researcher re tabling a Parliamentary question. But Mr Hemming had wriiten on 2 July to the Chancellor, George Osborne, and on 4 August I received a copy of a letter (dated 25 July 2012) to Mr Hemming from the Commercial Secretary to the Treasury, Lord Sassoon. Main text of the above:
Re: JAMH21291 Protection of Savings
This is a short letter to confirm that we have received the enclosed response to the above enquiry from to the [sic] Her Majesty's Treasury.
The treasury has set out the reasons Savings Certificates were withdran from sale, owing, it seems, to them being over subscribed, and has set out other methods in which it is supporting savers.
It is also worth noting that the economic situation has improved, with Inflation currently running at 2.4%, much closer to target than a year ago.
I trust this information is useful to you, but if you have any further concerns please do not hesitate to contact me again.
Letter from Lord Sassoon to Mr John Hemming MP, 25 July 2012: 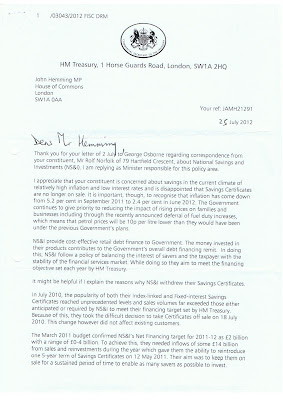 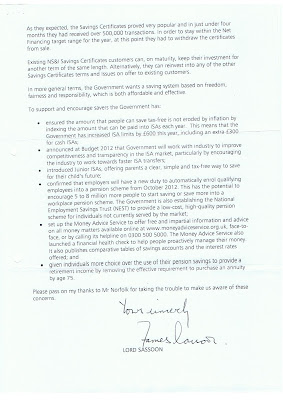 Main text of the above:
Dear Mr Hemming
Thank you for your letter of 2 July to George Osborne regarding correspondence from your constituent [...] about National Savings and Investments (NS&I). I am replying as Minister responsible for this policy area.
I appreciate that your constituent is concerned about savings in the current climate of relatively high inflation and low interest rates and is disappointed that Savings Certificates are no longer on sale. It is important, though, to recognise that inflation has come down from 5.2 per cent in September 2011 to 2.4 per cent in June 2012. The Government continues to give priority to reducing the impact of rising prices on families and businesses including through the recently announced deferral of fuel duty increases, which means that petrol prices will be 10p per litre lower than they would have been under the previous Government's plans.
NS&I provide cost-effective retail debt finance to Government. The money invested in their products contributes to the Government's overall debt financing remit. In doing this, NS&I follow a policy of balancing the interest of savers and the taxpayer with the stability of the financial services market. While doing so they aim to meet the financing objective set each year by HM Treasury.
It might be helpful if I explain the reasons why NS&I withdrew their Savings Certificates.
In July 2010, the popularity of both their index-linked and Fixed-interest Savings Certificates reached unprecedented levels and sales volumes far exceeded those either anticipated or required by NS&I to meet their financing target set by HM Treasury. Because of this, they took the difficult decision to take Certificates off sale on 18 July 2010. This change however did not affect existing customers.
The March 2011 budget confirmed NS&I's Net Financing target for 2011-12 as £2 billion with a range of £0-4 billion. To achieve this, they needed inflows of some £14 billion from sales and reinvestments during the year which gave them the ability to reintroduce one 5-year term of Savings Certificates on 12 May 2011. Their aim was to keep them on sale for a sustained period of time to enable as many savers as possible to invest.
As they expected, the Savings Certificates proved very popular and in just under four months they had received over 500,000 transactions. In order to stay within the Net Financing target range for the year, at this point they had to withdraw the certificates from sale.
Existing NS&I Savings Certificates customers can, on maturity, keep their investment for another term of the same length. Alternatively, they can reinvest into any of the other Savings Certificates terms and issues on offer to existing customers.
In more general terms, the Government wants a saving system based on freedom, fairness and responsibility, which is both affordable and effective.
To support and encourage savers the Government has:
Please pass on my thanks to Mr Norfolk for taking the trouble to make us aware of these concerns.
Yours sincerely
James Sassoon
LORD SASSOON
Email from me to Mr John Hemming MP, 05 August 2012:﻿
Dear Mr Hemming


Thank you for forwarding Lord Sassoon's letter, which arrived here yesterday. It is not at all up to the standard that I would expect from a Treasury mind; in fact, it is little short of a disgrace.
The first page confirms what I suspected, that the present Government is concerned only with its own funding needs and not at all with what should be its commitment to savers, not to say the currency (which according to the BoE's own website has lost 99% of its value since 1900). As you know, National Savings Index-Linked Certificates were introduced in 1975, a year in which RPI inflation was, as I said to you before, 24.2%. If the government of the day could bring in this product at such a time of crisis and galloping inflation, I cannot see any justification for the present hiatus.
The point about the present level of inflation is useless. Savers need to know for sure that their money retains its spending power over the chosen period, not to be informed from time to time that RPI may have temporarily dipped.
The second page slides further downhill into irrelevant party political nonsense. To be specific about its failures to address the subject, I will take each of Lord Sassoon's points in order:
Sir, you have established something of a reputation as an MP who is prepared to ask awkward questions in Parliament, irrespective of party political aspects. This question is inconvenient to the present administration, but crucial to the financial wellbeing of many people throughout the country. I do not think it is ethical for the government to take the view that the man in the street must be forced to accept investment risk, merely when he decides to set aside some money for tomorrow instead of spending it today. His prudence should not be seen as an opportunity to shear his fleece with inflation.
May I respectfully request that you take this further to PMQs or Questions to Ministers, and make a proper fuss?
Yours faithfully
Answer (same day):
Parliament is not sitting at the moment.

I will look at the letter later next week (I am at a funeral on Monday) and come back to you on this. The sovereign debt issue is a very serious issue, however


Does the Minister accept that the opportunity to invest in inflation-proof schemes is an act of belated social justice to millions of people who have seen their savings irreversibly damaged during the recent rapid rise in the rate of inflation? Will he make recompense to many of them by easing up on his vindictive attacks on the principle of savings embodied in the capital transfer tax and the wealth tax?

The hon. Gentleman has put his supplementary question at the wrong time, because National Savings are rising very well at present. I am sure he will be delighted to hear that. As to what he called "belated social justice", I am sure he will pay due attention to the fact that the scheme was introduced by a Labour Government and not by a Conservative Government.
Mr. Nott
Is the Chief Secretary confident that a further extension of index-linked schemes—which are welcome to savers—will not cause a diversion of funds away from deposits with building societies, leading to a rise in the mortgage interest rate?
§Mr. Barnett
We are, indeed, aware of those problems. That is precisely why we introduced the scheme in this limited way.
Hansard record of House of Lords debate, 4 November 1975:


My Lords, does my noble friend agree that while the index-linked schemes are extremely good value for money, it would be a good idea—as inflation has been rather rampant—to increase the maximum amount that can be invested in them?