The quiet collapse of the pound 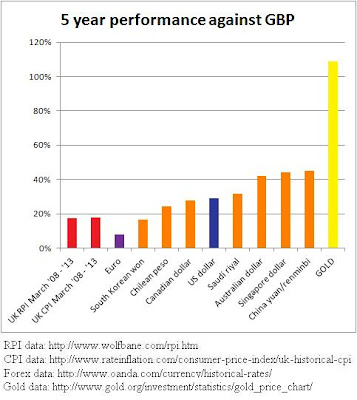 The forces ranged against the British pound may be so powerful that the government is in no position to offer inflation protection to savers.
I show above what has happened over the past five years. Nominally, UK inflation has advanced by 17 or 18 per cent, depending on how you choose to measure it.
Gold has soared, and had already done so for some time before 2008, but it had been at a low point for a long time during the years of the phoney boom. I still feel that, bearing in mind the amount of extra money pumped into the economy, gold is fairly valued. But compared to other assets it's a small market and so more volatile and subject to manipulation, so for the active trader it's full of traps: 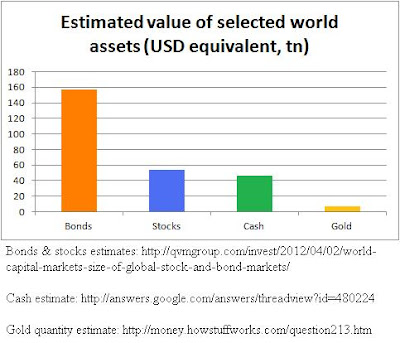 So let's return to the first graph and look at the currency market instead, to get a feeling for our relative performance and a hint about the future.

The euro has risen 8% over the period - not dramatic, but the EU has its own large problems.

The US dollar has risen 29% and although it is an ailing giant, the dollar is still the world's major reserve and trading currency, so when crisis hits there may be a flight to USD. Longer term, the US economy is out of kilter, like that of the UK and EU, so all three are in a quandary - the choices appear to be painful deflation and social unrest, monetary inflation with all that attends it, or debt defaults and forgiveness (which powerful creditors are determined to prevent).

My feeling is that the UK will pursue the first course until it's politically impossible, then the second (by which time the smart money will have got out, as happened in a different way in the Cyprus bank debacle).

The orange columns (except for Saudi Arabia) show the progress of the six currencies tipped for 2013 by the Money Morning website. I have no idea whether their recommendations are good. And again, I'm not one of these nimble traders that draw lines all over their charts and make references to the Fibonacci series, tramlines, head and shoulders etc. Like all professional gamblers, they're terrific until they get to the point where they sell their binoculars for one last punt. Good luck to them but I haven't got their nerve.

What I'm looking for - and what was available for 35 years in this country, until the Coalition took over in 2010 - is something for the humble saver. Something safe that will simply hold its value in spending terms, after inflation and taxation. In short, something that makes saving worthwhile, instead of a form of slow financial suicide. I don't see why the cautious, prudent saver has to choose between losing to the pickpocket of inflation, or alternatively to the croupiers in the marble-halled casino of stocks and bonds.

But we may have gone beyond the point of finding the right bank for our safe haven; we could be at the stage of backing the right country. There's a stealthy run on the banks going on now - not only in Cyprus, but capital flight from the Euro area; soon enough, I fear, there'll be a sort of run on countries.

In which case, I'd be looking for one that is politically stable, balances its budget, is strong enough to defend itself (and isn't near a psycho state like North Korea), doesn't feel obliged to join in competitive devaluation to maintain its exports, doesn't have porous borders or an over-generous welfare system, and has what other countries will still want once the international disaster is over.

Australia, with its industry-relevant natural resources? The USA, with its high arable land-to-population ratio?

Wish I knew. Perhaps I should back all the best horses in the race. But one thing seems clear to me: the UK is not one of them.

All original material is copyright of its author. Fair use permitted. Contact via comment. Nothing here should be taken as personal advice, financial or otherwise. No liability is accepted for third-party content, whether incorporated in or linked to this blog; or for unintentional error and inaccuracy. The blog author may have, or intend to change, a personal position in any stock or other kind of investment mentioned.
Posted by Sackerson at 16:29