Fighting the Government for savers and against inflation (4)

We have new, again not wholly satisfactory, replies from the Treasury: 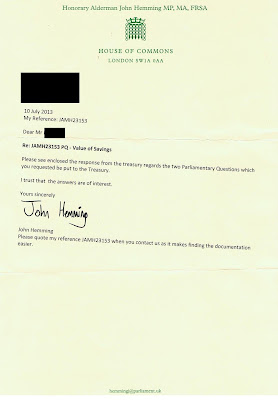 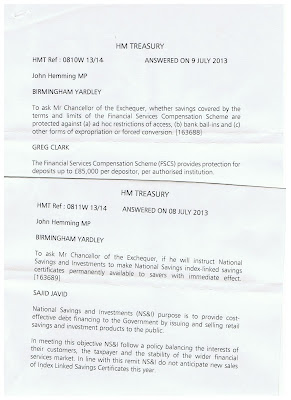 MP's covering letter (dated 10 July 2013):
"Please see enclosed the response from the treasury regards the two Parliamentary Questions which you requested be put to the Treasury.
"I trust that the answers are of interest."
My comments:
1. One of my questions has been materially altered and this has destroyed a vital point, namely, the moral case for protecting the value of savers' deposits - an argument that was clearly accepted when Index-Linked Savings Certificates were introduced in 1975.
2. The answers are certainly "of interest" (I have to hope that the MP is being ironic) as both fail to resolve one or more substantive issues in the questions as originally proposed.
FIRST QUESTION
My version:﻿
"Is the [Minister/PM] aware that National Savings Index-Linked Savings Certificates were introduced in 1975 as a form of social justice to savers affected by inflation, as is made clear by exchanges in this House on 10 July 1975, and will he now instruct NS&I to make them permanently available again without further delay?"
Version as put to Minister:
"To ask Mr Chancellor of the Exchequer, if he will instruct National Savings and Investments to make National Savings index-linked savings certificates permanently available to savers with immediate effect."
Treasury written answer, from Mr Sajid Javid MP (08 July 2013):
"National Savings and Investments (NS&I) purpose is to provide cost-effective debt financing to the Government by issuing and selling retail savings and investment products to the public.
"In meeting this objective NS&I follow a policy balancing the interests of their customers, the taxpayer and the stability of the wider financial services market. In line with this remit NS&I do not anticipate new sales of Index-Linked Savings Certificates this year."
My comments:
It is particularly disappointing that the reference to proceedings in Parliament was excised, because they show that the Government and the Opposition accepted the MORAL case for protecting the value of savers' money. I had thought the editing was done by the MP, but he seems to be suggesting that it was done by the officials who handle the questions submitted.
I have Tweeted Mr Javid:

From the Daily Telegraph, 15 March 2010:
"NS&I Index-linked Savings Certificates are also known as Inflation-Beating Savings and are designed to give savers a guaranteed tax-free rate of return, higher than the rate of inflation measured by the Retail Prices Index (RPI), if held for the full certificate term.

"The certificates were launched in 1975 and were initially available exclusively to pensioners as a way of protecting their savings against high inflation. In 1981 the exclusivity of the certificates was dropped and they were made available to all savers."

May I also draw your attention to two passages in Hansard from 1975 that make it perfectly clear that Government recognises the moral obligation to protect the value of savers' money?

Mr. Neubert
Does the Minister accept that the opportunity to invest in inflation-proof schemes is an act of belated social justice to millions of people who have seen their savings irreversibly damaged during the recent rapid rise in the rate of inflation? Will he make recompense to many of them by easing up on his vindictive attacks on the principle of savings embodied in the capital transfer tax and the wealth tax?
§Mr. Barnett
The hon. Gentleman has put his supplementary question at the wrong time, because National Savings are rising very well at present. I am sure he will be delighted to hear that. As to what he called "belated social justice", I am sure he will pay due attention to the fact that the scheme was introduced by a Labour Government and not by a Conservative Government.
Mr. Nott
Is the Chief Secretary confident that a further extension of index-linked schemes—which are welcome to savers—will not cause a diversion of funds away from deposits with building societies, leading to a rise in the mortgage interest rate?
§Mr. Barnett
We are, indeed, aware of those problems. That is precisely why we introduced the scheme in this limited way.
Hansard record of House of Lords debate, 4 November 1975:

Lord LEE of NEWTON
My Lords, does my noble friend agree that while the index-linked schemes are extremely good value for money, it would be a good idea—as inflation has been rather rampant—to increase the maximum amount that can be invested in them?
§Lord JACQUES
My Lords, the Government have two conflicting obligations. One is an obligation to the taxpayer to buy goods and services as economically as possible, and secondly there are certain social obligations. The Government believe that by the action they have taken they have got the right balance.
SECOND QUESTION
My version:
"Will the [Minister/PM] give a guarantee on behalf of the British Government that savings covered by the terms and limits of the Financial Services Compensation Scheme will be fully protected against ad hoc restrictions of access, bank bail-ins and other forms of expropriation or forced conversion?"

Version as put to Minister:

"To ask Mr Chancellor of the Exchequer, whether savings covered by the terms and limits of the Financial Services Compensation Scheme are protected against (a) ad hoc restrictions of access, (b) bank bail-ins and (c) other forms of expropriation or forced conversion."

"The Financial Services Compensation Scheme (FSCS) provides protection for deposits up to £85,000 per depositor, per authorised institution."

I have tweeted Mr Clark:

We have seen that savers in Cypriot banks originally faced partial loss of even their insured deposits. Now the proposal is to convert some of account amounts above 100k Euro into bank shares, and some of the rest is to be lost or frozen or ineligible to receive interest.

But it doesn't stop at Cyprus. A Russian journalist, Valentin Katasonov, sees this as a global trend towards "Open Bank Reconciliation", and there is now Europe-wide agreement on making not only bondholders but depositors pay the cost, as Bruno Waterfield reported in the Telegraph.

Here in the UK, the Bank of England has set up a "Special Resolution Unit" for failing banks; the SRU Director Andrew Gracie gave a speech to the British Bankers' Association (pdf) in September 2012, outlining what might happen and how it would be carried out and the media coverage appropriately managed. Among the public announcements he envisages (pp. 4-5) are:

"any insured depositors would be fully protected - as is always the case; and [...] the final extent of creditor write-downs, and rates of conversion to equity."

Now, an ideas speech to bankers is not a binding commitment or a statement of official policy. If push comes to shove, can we be absolutely sure that some of our "insured" money won't be frozen, or compulsorily swapped for shares in a bank of established dubious quality? This is why we need very specific assurances - or to get our money out.

If that last sounds alarmist, note the rumour on John Ward's blog, that JP Morgan is now sending people into Portugal to help big investors get their cash out of the country ahead of a bank bail-in there. And Barclays is among several banks recently downgraded by S&P.

The issues may soon turn out to be far more than merely theoretical.

The following email exchange with the MP today may be of interest.

Me: Thank you for your letter and enclosures of 10 July. I assume that your concluding remark about the answers being "of interest" is tinged with irony. I have Tweeted the Treasury ministers concerned to get more relevant, more specific replies.

He: What they are basically saying is that they don't want to issue any more index linked debt at the moment. They are also saying the 85K is safe.

Me: I understand that. Please don't think that you're the only grammar-school-educated boy in South Birmingham. I also have a degree in English from Oxford.

My point - and it would have been clearer if you hadn't edited out one of the most important parts - is that it is not only my view that they are morally obliged to offer index-linked securities, but the view of the Government that introduced them in 1975, and also that of the Opposition at that time.

As to "safety", this too needs clarification. Argentinian depositors' money was safe during the 2001 corralito, but it wasn't accessible.

I am on Day 398 of this enquiry via yourself and think it might be better if we pursued the case in parallel from now on.

Let's see if the Press can help. Andrew Oxlade at the Telegraph called for a return of "Thatcher bonds" back in April, now I've Tweeted him:

All original material is copyright of its author. Fair use permitted. Contact via comment. Nothing here should be taken as personal advice, financial or otherwise. No liability is accepted for third-party content, whether incorporated in or linked to this blog; or for unintentional error and inaccuracy. The blog author may have, or intend to change, a personal position in any stock or other kind of investment mentioned.
Posted by Sackerson at 09:16

As a holder of a fair amount of cash myself, I understand where you are coming from and, no doubt, you do have a lot of support from savers, but I can't see this campaign succeeding for a while yet.

There are some blunt facts that make it unlikely:

2) The government is in a financial mess of long genesis and duration and it needs money. Obviously, borrowers don't have it, but savers do. That's why they will be hit. The logic is inevitable.

3) No political party supports an imminent rise in rates nor a return of ILSCs. No reason for the government to borrow at comparatively high rates from the retail market when it can do better via the DMO.

4) As far as economic policy is concerned, no government acts "morally"; never has done, never will. The debates of 1975 which you claim justify a moral case were just cynical attempts to pacify a public outcry over 20%+ inflation.

5) We are not at a similar point yet, and the ongoing policy of further inflating the property market will mean that the needs of borrowers (and the risks they run from rising rates) will loom larger in the public debate for some time.

Personally, I'd love to see higher rates and the return of ILSCs but, as ever, the government is hemmed in by short term political considerations. Neither Labour nor UKIP offer a credible and sufficient economic alternative to be an electoral concern.

Hi, SG: I think this is one of those Japanese stories where you fight even though you know you're doomed.

What is more interesting, perhaps, is the tone of replies from MP and Ministers. Truly they think we are stupid and ignorant. Such arrogance deserves correction. You may wish to look at the update to this piece.

Indeed, I sympathise, and if you can build an interest in the media, so much the better. Good luck!

I hope that everyone here has joined Save Our Savers http://www.saveoursavers.co.uk/ if you have not please take time to join up and participate in furthering the savers campaign for fair interest rates and rejecting the governments artificial suppression of market interest rates