China NOT withdrawing support from the US?

UPDATE (28 Feb): another theory (which I heard on Max Keiser's site yesterday) is that China spent the money on buying IMF gold instead, though that doesn't explain the surge in buying from the UK. We'll see next month whether China resumes its support for Treasuries.
______________________________________________"Foreign demand for US Treasury securities falls by record amount as China reduces holdings"
... That's the AP news story as relayed by the Drudge Report. But is all as it seems?

Looking at the data published by the US Treasury, China's holdings dropped by $34.2 billion between November and December 2009; but at the same time, the UK's holdings increased by $24.9 billion, and Hong Kong's increased by $6.7 billion. (The AP reporter quotes a total drop in foreign holdings of $53 billion that month , but that's for T-bills alone, NOT Treasury securities as a whole, which ROSE by $16.9 billion.)

Back in January 2009, Brad Setser analysed purchases of US Treasuries and Agencies, and concluded that the UK (and, to a lesser extent, Hong Kong) was making proxy purchases on behalf of China.

Here is the picture of US Treasury holdings by Japan, China and the UK between Dec 2008 and Dec 2009 (figures are in billions of US dollars): 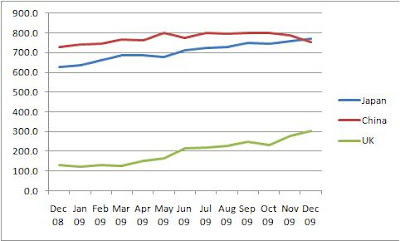 Now, here is the same information, but aggregating holdings by China and the UK: 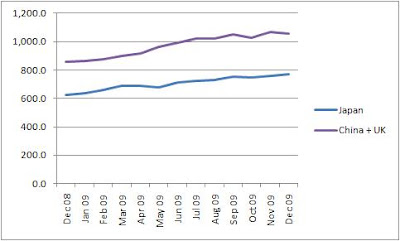 ... both have risen by 23% over the 13 months to the end of 2009 - like two horses under one yoke. (Total foreign holdings of US Treasury securities increased by 17%).
Far from "China's pulling out", the story might be read as "All hands to the pump, or we'll all sink".
UPDATE: Jake at Econompic concurs.
SECOND UPDATE: It seems one of POTUS' interns is also interested in this issue, to judge by a fleeting visit to this blog: 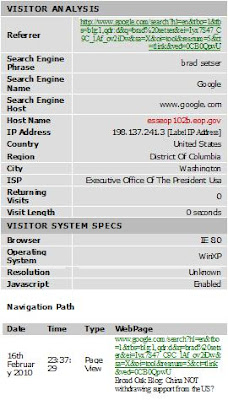 DISCLAIMER: Nothing here should be taken as personal advice, financial or otherwise. No liability is accepted for third-party content, whether incorporated in or linked to this blog.
Posted by Sackerson at 15:20