We are in a phase previously seen in the early 80s and early 90s, where commentators and politicians are on the look-out for "green shoots". The 0.1% growth in British GDP for the last quarter is hailed as the official end to the recession, ignoring the painful fact that for 2009 as a whole the economy has suffered a major contraction. That fraction of a percent quoted is so slim as to invite re-examination, and doubtless once one's factored-in margins of error in definition and reporting it might not even be a positive figure after all.

Reported marginal increases in turnover glosses over the fact that companies have been selling off surplus stock at discounted prices, so the profit per unit of production has decreased. Sooner or later, a fall in profits per share will press the markets down again, prompting further layoffs and site closures. This will hit commercial property rents and valuations; and with more unemployed, consumers' mood will become yet more cautious. The cost of the health and welfare system will fall more heavily on a reduced workforce and business base, leading to further pressure to cut costs and maybe move production abroad. That's not just industrial production: with lightspeed communications systems and millions of well-educated, English-speaking people in overseas labour forces, white-collar workers should not imagine that they are safe, and that it is only blue-collar workers and menial employees who must worry about their jobs.

Something must give, and the public sector and the welfare system are in the firing line. However, it is a moot question whether politicians in our democratic systems are able to make tough enough decisions, fast enough. They will look for some other way out, and many will cheer them on- we're already seeing calls for monetary reflation, as though more of the same will cure us.

My self-imposed brief is not to play Cassandra, but to stop my clients and my readers being suckered in the last money grab before the economies restructure. I note that Money Week has finally come round to my view: 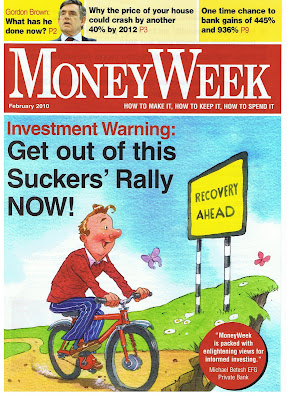 Where should you place what little money you have?

Jeff Clark, of Casey Research, says: "We currently recommend our subscribers keep 1/3 of their assets in cash, 1/3 in physical gold, and 1/3 in other investments, including top-notch gold proxies and stocks."
The emphasis on physical gold is significant, because there's much more being traded in promises than can be delivered - if everyone demanded sight of their gold, there'd have to be a sort of pass-the-parcel game for all the contracts to be fulfilled. For the first time in many years, central banks have become net buyers of gold, and China has declared her intention to increase her own stocks from 1,000 tones to 6 or 10 times that in the next decade (China is now the world's largest producer of newly mined gold). There's also a scare story doing the rounds, about some (how many?) bullion bars being nothing more than tungsten coated with a thickish layer of gold; and US Congressman Ron Paul may yet succeed in his campaign for a full audit of the Federal Reserve, which might reveal, among other things, just how little gold is still in the Fed's vaults. It's true that gold has risen very sharply in price over the last few years, and is now above its long-run average in real terms, but that's not surprising at a time of growing unease and distrust of the money system and government in general. Whether the price will explode as some of the gold bugs say, is another matter. Gold is a small market and the speculators are playing in it with cheap borrowed money. (UPDATE: see this article on how gold has changed its behaviour and is now going up and down like other investments - a sign, perhaps, that the speculators are now running the show in gold.)
My approach is to make a distinction between investment and speculation. Investment, I'd suggest, is putting your money where it will grow largely in line with the overall growth of the economy; speculation is trying to achieve more, which must be at someone else's expense. The latter is therefore a gamble, and gamblers often lose.
You should also review your money objectives in the light of your personal circumstances and goals. Do you need to gamble? Remember that there are still fairly secure ways to protect yourself against inflation or default - various National Savings products in the UK, and Treasury products in the US.
I've suggested many times that we will eventually see a much deeper decline in the stockmarket - maybe 4,000 on the Dow and 2,000 on the FTSE - though when, who knows? Given my belief that we are in a "secular" (long-lasting) bear market, then clearly I think that at any point, there is a greater chance that stocks will go down than that they will rise. The odds are against us, and I think that will be true for the next 5 - 10 years. Gamblers will be looking for short-term recoveries, but you may have heard of the formerly big-time successful gambler (can't remember his name) who ended up selling his binoculars for one last bet at the track.
My view is ultimately hopeful, otherwise I shouldn't have bothered relaunching my brokerage this year. If you want a more spine-tingling view, here's an example - but that plays to an unrealistic, dramatic melancholy tendency in us. Even Hitler and his henchcreatures couldn't take the whole of the German people with them into Götterdämmerung. The United States has 300 million people, vast land not fully and efficiently used, mineral and energy resources, a huge and diverse skills base, and the light of freedom in its mind. There may well be uncomfortable change, but you'll never be shoving the bears out of caves to scratch a shivery living in the wilderness.

I'm more worried about my own country, Britain; but at least we don't have bears.

DISCLAIMER: Nothing here should be taken as personal advice, financial or otherwise. No liability is accepted for third-party content, whether incorporated in or linked to this blog.
Posted by Sackerson at 09:45

Re: Your link - His idea of 'a place in the country' for the rich sounds good, but most aren't used to that kind of work, nor have the skills.

They also don't take into account the large infrastructure required just to get seed, tools and the like.

The United States has 300 million people, vast land not fully and efficiently used, mineral and energy resources, a huge and diverse skills base, and the light of freedom in its mind. There may well be uncomfortable change, but you'll never be shoving the bears out of caves to scratch a shivery living in the wilderness.

And, every time I read one of these 'the world is absolutely coming to and end' essays, I find myself asking: What is this person selling?

What's in it for him?

This sounds like Y2K jabber. One clown who bought into it, a wealthy man, moved his family from a comfortable mansion south of Nashville to a set of double-wide trailers in northern Alabama in late 1999. Armed to the teeth, certain that anarchy was upon us.Waiting for Jesus to part the clouds. He has since moved on to another wife, twenty years his junior. I think he decided Jesus would tarry a bit longer...

I see too much resourcefulness and generosity in the society around me to believe that everything will totally come apart at the seams. Troubles, yes. Real dislocations and pain, yes.

But, given the recent spate of bad weather, I find myself quietly stocking the shelves, just in case we experience some disruptions. Prudence is a good thing.