Reasons to be fearful: a warning about the stock market

This is the time that tests bearish investors.

Interest rates on deposits are lower than inflation, if you look at food and energy costs. Since the 1990s, I have been more cautious than most of my investors and have been careful to suggest that they might like to keep their powder dry. Some listened and switched to cash in 1998 and 1999, and so avoided the fall out of the 2000-2003 decline.

Just when I was beginning to feel that things were getting sensibly priced, interest rates were pushed down and the already-existing house price bubble superinflated from 2003 on, along with much else. And then...

But now there is talk of investors being "forced" into the market by negative real returns on cash - and fears that inflation may rise significantly. I recently displayed a graph from the Now and Futures site, showing how German shareholders survived the Weimar hyperinflation of 1923, after a severe interim drop. "Financial Armageddon" author Michael Panzner justly pointed out that there was a danger that investors in a similar situation might lose their nerve, sell out and miss the market recovery.

It is also very hard to stay out of the market when it has risen dramatically. I was batting away queries from clients in the latter stages of the tech stock boom with warnings of what I strongly suspected was a bubble ready to burst. But there is pressure to get in, not merely because of greed but in the case of fund managers, fear: the fear that your boss will use peer benchmarks to judge you negatively and appoint someone else to take over the portfolio. So you need nerve at more than one level in the organization.

Invesco Perpetual's Neil Woodford has that kind of nerve. During the dot com craze, he stayed out and stuck to his guns despite the stellar tech-invested performances of others' funds - and fortunately the management backed him.

Woodford was very bullish - selectively - in January this year, according to the Daily Telegraph. So how does he feel now? Well, bearish about China this week, according to Investment Week. This, at a time when others are coming late to the emerging-markets party, looking for something to get exciting returns. Surely, we tell ourselves, someone's making money somewhere, and we want a piece. This, I think, is the dangerous time.

It's caught out geniuses before now. During the South Sea Bubble of 1720, Sir Isaac Newton bought in, sold out and made £7000 profit - about £1 million in today's money. Then, seeing the market soaring further, he bought in again. And the scam crashed, costing him £20,000 - the equivalent of nearly £3 million.

Some say the market now has been climbing a "wall of worry", so that really we're not in a mania and reasonable concern has already been factored into valuations. Personally, I fear that this is like a lunatic certifying his own sanity and discharging himself from the hospital - "I'm all right now."

I'm not alone in this fear. In a Financial Sense article by Tim Wood yesterday, he says:

"I continue to believe, based on the evidence at hand, that the rally out the March 2009 low is a large scale bear market rally that should ultimately prove to separate Phase I from Phase II of the much larger and ongoing secular bear market. But, just as I told my subscribers before that low was even made, the longer this rally holds up, the more dangerous it becomes. Reason being, it becomes more and more convincing."

We have interest rates lower than ever, debts higher than ever and a financial sector borrowing cash at giveaway rates and playing games in the market. We now have an interdependent world economy, which is like lashing all the lifeboats together - extra security in a small storm and complete disaster in a big one.

Granted that the situation is such that there is no completely valid basis of comparison - and remembering that the Dow now lists companies that garner much more from foreign earnings than they used to - let's take a look at the Dow adjusted for CPI inflation since the peak before last - the one in January of 1966: 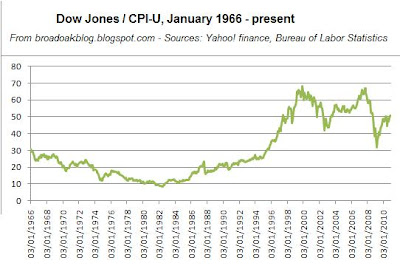 Remember, too, that everyone agrees that we've just had a recession, and many say we're not out of it. Where would you pin the tail on this donkey? Mr Market appears to have stuck it on the back of his neck.

If we are climbing the Wall of Worry, we're starting from very high up. Don't look down.