CMA Datavision reports concerns by the market in credit default swaps about the UK's ability to service its debts, as the following shows: 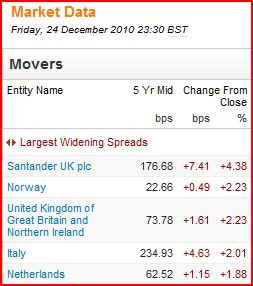 Britain's largest bookmaker Ladbrokes now rates 2011 as the second most likely year for a General Election:

The Odd Couple coalition of the Liberal Democrats (thought by many to be to the left of the British Labour Party until the latter reconnects with its old-style socialist roots) with a superficially touchy-feely new Conservative Party, may not be able to handle the strain of living together.

Already we have seen riots (to some extent sympathetically covered by the news media) about the raising of tuition fees for students, and the Coalition has been embarrassed by the publication of critical private remarks by Liberal MPs about their Conservative colleagues.

The present British Government is the first non-wartime coalition since 1922. If it cannot hold its crew together in these choppy seas, it will not be able to steer through the economic storm to come - and then our troubles will begin in earnest.