Unfunded pension liabilities are a major part of the problem for this and most other States. The total deficit for such schemes nationally was $3.04 trillion in mid-2008, according to this February 2010 study by Andrew Biggs of the American Enterprise Institute. Illinois has the fifth-worst (40%) underfunding in proportion to State GDP (fig. 6, page 48).

Of more concern to a long-term bear like me is where those funds, inadequate as they may be, are invested. Here's Figure 1 of that study: 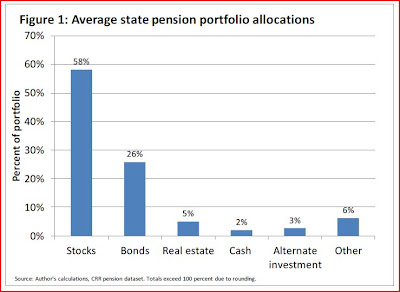 If' like me, you fear that both stocks and bonds will be hit badly when the credit crunch finally matures into a lender's strike, then a radical revision of pension entitlements is on the cards.