Cash - the investment of the century

There's been comment recently about how the ordinary investor has been abandoning the market, in some cases with an undertone of contempt for the poor saps who are missing out on those incredible gains to be made just around the corner.

The banks who from time to time attempt to poach my clients often use past performance an an indicator of future returns, while of course covering themselves by the usual disclaimers. Typically they cherry-pick among terms of 1, 3, 5 and 10 years.

Let's see how the graph for the Dow would look over various time periods, and compare it with cash in your bedsock. To be fair, let's ignore the interest you could have earned on cash, and the dividends on stocks; as a special favour to the Dow, so being especially unfair to cash, let's also ignore the offer-bid spread and the fees and charges loaded onto the investor.

Over the last 12 months:, you could have made a good profit - well, you could if you'd got out a month early: 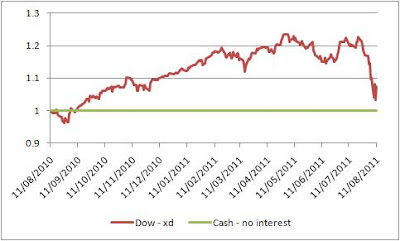 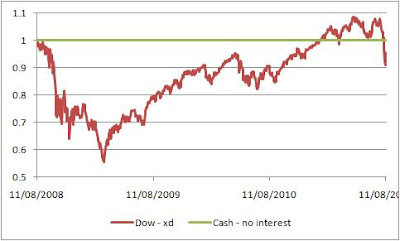 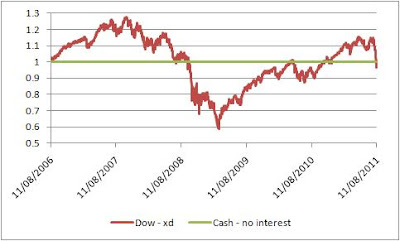 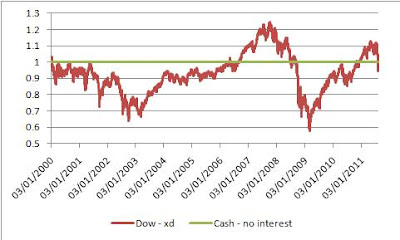 "Mish" today points out that we are in deflation, if you are a monetarist, since credit and asset values have contracted. Inflation scares suit those who are running what some call a "wolf market" - come out, little pigs, it's all clear now.
What inflation? The consumer - and the inflation indices - may notice a rise in food and energy prices, but that's not what your nest-egg is for. Look at house prices - still going down in the UK and the USA - and all the other big-ticket items that in recent years were purchased with borrowed money.
I think Mish is right, for now. The concern I have - and it's reflected in the soaring price of gold - is what governments will do in their desperation once giving money to busted and corrupt banks (and governments) is finally seen as worse than useless. Can the bond market really dictate terms in an economic collapse, or will governments across the world break their currencies with the final splurge of money-printing that third-party control by central banks is designed to prevent?
Until that time, and despite the temptations of commodities, maybe cash-holders should hold the line while the enemy advances. A lot depends on your personal plans, of course; we're hoping to move house and such cash savings as we have may continue to appreciate against the thing we want. So really it's about relative values - comparing asset A with asset B - decided by you, not some index that doesn't reflect your priorities.
INVESTMENT DISCLOSURE: None. Still in cash (and index-linked National Savings Certificates), and missing all those day-trading opportunities.
DISCLAIMER: Nothing here should be taken as personal advice, financial or otherwise. No liability is accepted for third-party content, whether incorporated in or linked to this blog.
Posted by Sackerson at 09:48

It really seems impossible at the moment to know what to do because the markets are so distorted by intervention. And as you point out there's always the big worry that government will do in desperation.

Can the bond market really dictate terms in an economic collapse, or will governments across the world break their currencies with the final splurge of money-printing that third-party control by central banks is designed to prevent?

What is coming is called SDRs.