This time it really is different. The Bank of England figures for percentage growth in M4 show a decline to zero for the quarter ending June 2009, for the first time since the data series began in 1963. That zero mark was reached again in June this year, and in the last quarter it plummeted to a record negative 8.1% annualised. 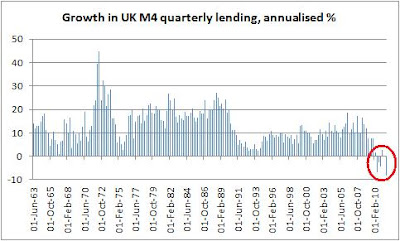 This, despite targets being set for lending to small businesses. I've just heard an interview on the News at One (Radio 4) with someone from one of the zombie UK banks, Lloyds. Under February's "Merlin project" agreement, gross lending to business was supposed to increase by £190 billion this year; the banks are on target to do so, but are not meeting their quota for small enterprises.

And there's fudging going on. The smart R4 interviewer said there are rumours that banks have been cancelling existing loans early and replacing them with fresh ones, so as to appear to comply with gross targets; the Lloyds spokesman dodged that point with a weak assertion that net lending had increased (he didn't specify by how much). And that's net lending to businesses, not net lending to the private market overall, so I shall be interested to see the M4 figures to December, when they are released.

Meanwhile today Marc Faber gave an interview on Bloomberg (see below), in which he said that current US policy is to keep interest rates at rock bottom until the unemployment rate drops below 7.5%. Faber cast doubt on this plan, observing that America now has a very large pool of unskilled people and that there may be a long-term 10% unemployment rate. He compared this to the Middle Ages, when there were economically-dependent "village idiots" all over the place.

(I give the link below, because the embedded video autoplays, which is irritating.)

This is where the calculations of politicians have gone wrong. Imported un/semi-skilled labour (often exploited and brutalised, from what I read about the UK food industry) and foreign-outsourced industrial labour may have benefited the businesses concerned, but keeping large numbers of our fellows unemployed has rotted their skillsets, morale and work habituation, not to mention their health and family relationships. There is also a growing element of the service sector devoted to patching the damage - policing, law, social services, benefit payments, health services, special education for the children and so on.

There is a level of incompetence that is criminal; and if some of these effects were reasonably foreseeable, it could be argued that some of our leaders should be impeached for economic treason, under the category of "high crimes and misdemeanours".

DISCLAIMER: Nothing here should be taken as personal advice, financial or otherwise. No liability is accepted for third-party content.
Posted by Sackerson at 13:36

"if some of these effects were reasonably foreseeable": since they were widely foreseen, they were clearly foreseeable. It's my impression that those who pointed them out were called reactionaries, backwoodsmen, fascists or - in a famous example - bigots.

How nice to hear from you, DM, I thought I'd become an unperson. Who said "bigots"?

Didn't Mr Brown call old Mrs Whatsit a "bigot" on his drive to win the hearts and minds of people much like her?

Seems that I missed 'populists, chauvinists and demagogues' (The Deputy Prime Minister).