It's not about the banks

Like Scarlett O'Hara in "Gone With The Wind", the banks believe their happiness trumps everyone else's. The web of bank debt and sovereign bonds has come to dominate the agenda, to the extent that Italy's government can be dismissed by foreign interests and replaced by a wholly unelected cabinet. 'This is not the time for elections but the time for actions', said Herman van Rompuy; no Abraham Lincoln, he.

Not all banks have misbehaved, but many of the largest now appear to be ruined enterprises, determined to take rest of us down with them. I cannot explain why our politicians have poured resources into these colanders, except in terms of self-interest as current or future workers for the money establishment.

The banks' self-absorption is assisted by news media such as the BBC, with e.g. their latest interactive infographic on the Eurodebt nexus. Here are some of the results, recast as a table - ranked by external debt to GDP: 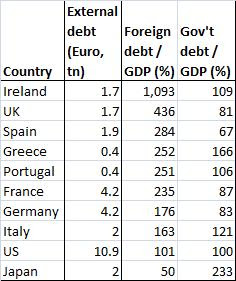 The pundits' talk is of the PIIGS, yet after Ireland the next worst case - by a long way - is the UK.

Something is wrong here. It's not the facts (though in a fiat currency world, I'm not quite sure what a financial fact is), it's the perspective: we're forgetting to look at the balance sheet, i.e. the net international investment position (NIIP). Leslie Cuadra did this on Financial Sense at the end of August, and it paints a rather different picture. Of the 40 major countries he surveyed, the US is at the bottom, and Spain next up. Greece's position is much better, scarcely worse than that of France. Hmmm...

Let's widen the view a bit further. Here are Cuadra's figures, reinterpreted in the light of the IMF's data on GDP (click to enlarge): 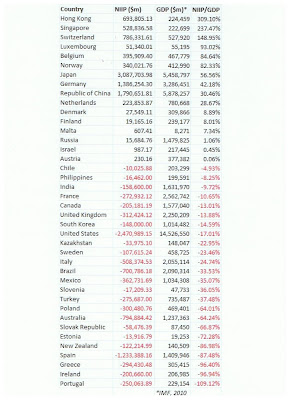 This arrangement chimes better with our level of concern, at least with four of the PIIGS; yet it leaves us wondering why democracy has suddenly been abolished in Italy. And why are we worrying about Japan, when she looks so good on these rankings?

It would seem that there is no one picture that tells the whole story. And that, I would suggest, is because there are many stories, many competing agendas. There's a sort of economic Great Game going on, with a full cast of tyrants, traitors, spies, revolutionaries and dumb foot-soldiers pepper-spraying harmless women. It is a time of great and unpredictable change, which is why gold has soared and the people are stocking their cellars and buying ammo faster than it can be made.

An increasing concern, for me at least, is that the system (if it is a system) may not be able to contain this degree of instability, or at least, some parts of it are more vulnerable to fluctuation than others . If I may offer a pictorial analogy? 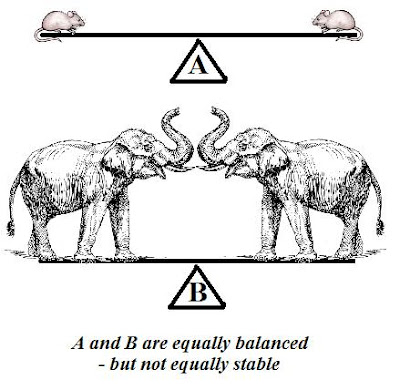 Equilibrium can be achieved at many different energy levels, and this has implications for the participants. If one of the mice hops off, there may be no effect at all, given the friction in a real-life device. But if Jumbo dismounts abruptly, Nellie will be lucky to avoid a broken leg, not to mention a possible smashed plank. And if Jumbo then playfully steps on one end of seesaw A, we're looking at a mouse in temporary low orbit, which is pretty much what happened in Iceland, Ireland and Greece.

Similarly, economic interconnectedness carries asymmetric potential perils, as shown in the table below, which uses the latest NIIP figures from the IMF's database (click to enlarge). For a small economy like Greece, a trifling sum such as $100 billion (a mere seventh of a TARP) represents around a third of national GDP, whereas the same sum is only about 3% of Germany's - chump change, almost. So it would be very easy for rich countries to forgive quite a lot of the debts of poor ones, and very beneficial for the recipients, especially those who have liabilities far exceeding their assets.

It would also be interesting to know to what degree, and in what ways, countries like Germany have benefited from tying peripheral European nations into the Eurozone. Perhaps it would be incautious of them to overplay, or over-rely on, the Protestant work ethic story in accounting for their dominance.

But the international web of finance has a further danger, for large and small economies alike. Those who are balancing mice, such as Russia (or even China, come to that) would not suffer a massive alteration to their NIIP/GDP ratio if asset or liability valuations changed by a few per cent; whereas a 10% valuation change for the UK means a boost or hit of two-thirds of GDP. Compare that with Austria, which has about the same negative NIIP in GDP terms, but which is balancing smaller figures.

One invests to get a return, and unless it's an in-and-out speculation the return is in the form of interest, dividends or rent. If your assets suddenly shrink - say because of relative movements in currencies - your income stream is pinched; if your liabilities swell, your outgoings become more burdensome. Clearly, Britain is exceptionally vulnerable to exchange rate fluctuations; but to a lesser extent, so are other countries such as Germany.

With share speculation, the growing volatility in the system can be insanely profitable for the gamblers - whose activities, far from being part of the steadying mechanism, may instead become a feedback loop that ends up smashing the engine. Andrew Haldane's July 2011 presentation to the Bank of England ("The race to zero") warned that as program trading in equities develops it will, mathematically, lead to more and worse "flash crashes".

But the bond market is much bigger, and the derivatives market is maybe 20 times world GDP. Never mind elephants, this is more like balancing two pods of blue whales. There's no room for error and there must be a political will to de-escalate. Sadly, I don't see it happening, yet. And it won't, so long as we think that the banks must be saved at all costs, together with their trading rooms.

DISCLAIMER: Nothing here should be taken as personal advice, financial or otherwise. No liability is accepted for third-party content.
Posted by Sackerson at 11:42

Comments copied from prvious (draft) version of this post:

The sentence under your cartoon isn't strictly true. May I offer you an old joke I learned from an engineer?

"In principle you can support an elephant on a drinking straw. But you have to stand right under the elephant."

I have a question for you, Sackerson. Everywhere I see blog posts to the effect that "everyone is selling Eurozone bonds." That's impossible: to whom? I know that the ECB is buying Italian bonds, but who is buying French, Belgian and so on?

Bonds - good point. Some clever dick in a merchant bank, I suppose.