The bank runs are starting

"Latvia's largest bank scrambled Monday to head off a run among depositors who were gripped by rumours of the bank's imminent ruin.

Weekend rumours that Swedbank was facing legal and liquidity problems in Estonia and Sweden sent thousands of Latvians to bank machines on Sunday, with some lines reaching as many as 50 people."

"... the outflow of funds from Greek bank accounts has been accelerating rapidly. At the start of 2010, savings and time deposits held by private households in Greece totalled €237.7 billion -- by the end of 2011, they had fallen by €49 billion. Since then, the decline has been gaining momentum. Savings fell by a further €5.4 billion in September and by an estimated €8.5 billion in October -- the biggest monthly outflow of funds since the start of the debt crisis in late 2009."

This combination of distrust of banks with raids on savings to support normal expenditure is reflected here in the UK. I know of a British financial journalist who is starting to hoard cash, and ING's third quarter report on savings shows that the ordinary person's cash reserves are continuing to decline: 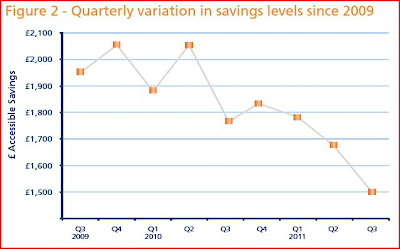 In a technical article (which I confess I find difficult to fathom - draw me a picture, somebody!), Tyler Durden looks at desperate attempts by the Federal Reserve and others to pump money into the economy as fast the "shadow banking" system is losing it.

We appear to be in a mighty conflict between the forces of deflation and inflation. A miscalculation one way will give us full-scale economic depression, and the other way will result in hyperinflation (followed closely by economic depression). The balance has to be got exactly right, and if our leaders, bankers and economists were clever enough to achieve that we wouldn't be in this situation in the first place.

DISCLAIMER: Nothing here should be taken as personal advice, financial or otherwise. No liability is accepted for third-party content.
Posted by Sackerson at 06:24

Many months ago you mentioned the wisdom of keeping a decent sum in cash at home. It still looks like good (non-) advice.

To quote Ian Richardson in "House of Cards" - "You may very well think that; I couldn't possibly comment." Though there may be rather safer places than home, e.g. for those who are still working.