Is money-lending approaching its tipping point? 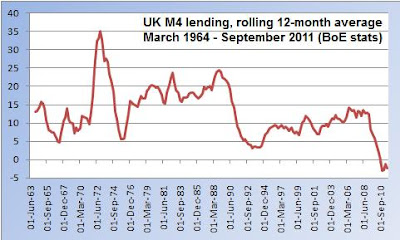 Chartists are always trying to scry a pattern in markets. Here's one that doesn't seem too difficult to discern: the long-term deceleration in bank lending to the UK private sector.

It looks like a cycle of around 18 years, but rather than simply repeating, the pattern is progressive: lower peaks each time, and lower lows. And for the first time since 1963 (which is as far as the online BoE data goes), we are in negative territory. Previous highs of  c. 35%, 25% and 15% suggest that the next peak will be more of a hillock, at 5%.

Or maybe there will be a phase shift, into some disorderly deflation. Australian Economist Steve Keen has attempted to model macroeconomic change as debt increases, and one curious feature is that the model predicts an apparent tendency towards a moderate point, followed by a catastrophic breakdown in wages and profits - see for example the graphs on pages 43 and 44 of his paper entitled "Are we 'It' Yet?".

The economy is not a machine, of course. It is more like a game played with ever-varying rules, like Calvinball. But the value of Keen's observations is in showing that there must, in fact, be a change in the rules at some point, simply because without it the game breaks down altogether.

Currently, our counters are cash notes, bank deposit statements, share certificates, bonds, Treasury promises and property deeds - plus the derivative contracts that outweigh everything else. Whether they will be freely accepted by all players in the next version of the game remains to be seen; perhaps they will suffer the fate of Continental and Confederate currency.

No wonder that many thinking persons are converting to tangible assets of various types, even if they seem overpriced according to the present system of reckoning.

DISCLAIMER: Nothing here should be taken as personal advice, financial or otherwise. No liability is accepted for third-party content.
Posted by Sackerson at 12:26

Interesting graph, Sackerson. Any thought on what's behind the big drops? They seem vaguely related to recessions, occasionally, but of longer duration.

partly to do with British politics. Pre the 70s oil price hike, bank lending appears to have been strongly encouraged (we were in the economic doldrums). Some would say that the oil price rise wasn't merely Arab retaliation for Western interference, but a reaction to what monetarists would see as an inflationary policy. Then we had the embarrassment of the IMF coming in and telling us what to do (including sacking PM Harold Wilson they say).

We were in another bust at the end of the 70s, so c. 1980 new PM Margaret Thatcher and new US President Reagan bought the private-enterprise story and turned on the money taps. Boom, then bust less than a decade later.

Wash and rinse again in the 90s, and again in the early 2000s, ending with reckless support of a busted system.

The most notable feature for me of this graph is how it works less well every time. Maybe this is the last go round before we have to radically re-set.

I'm rather taken with the reset idea. That's what the other Great Depression accomplished, in a rather brutal way. In ancient times, jubilee years were a general reset.

Now, due to the "Greed is Good" malosophy, we have to have the catastrophe.

I will say, yet again, that the fundamental problem is that we are measuring economic health by how much money flows around, and how quickly. That's why these cash infusion work less well each time.