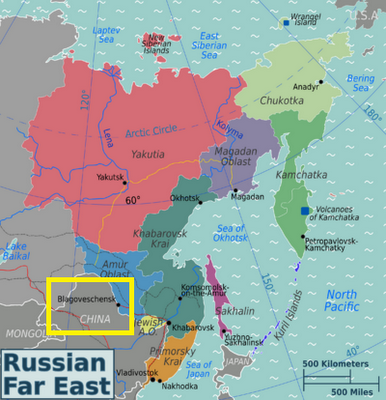 From France 24 (hat-tip: farmlandgrab.org) (loosely translated by me with Google Translate's help):

Long closed to foreigners, Siberia is now opening up to China. More and more Chinese are crossing the Amur River to settle there. Their presence is beginning to worry the Russian authorities, who see them as new competition.

Since the fall of the Soviet Union, the Chinese have been leaving the Middle Kingdom in growing numbers to settle on the other side of the border, in Russia, in the Far East region historically known as Eastern Siberia.

FRANCE 24 reporters went to Blagoveshchensk, a Russian city located more than 8,000 kilometers from Moscow and merely 800 meters from China. The two countries are separated only by the Amur River. In winter, when the river freezes, one can cross on foot.In summer, it takes less than ten minutes to get from one bank to the other.

It was once a front line where the armored divisions of the two feuding brother Communist states threatened each other. Now "Blago", formerly a closed city, has become the symbol of Far East "sinicization". Here, without the Chinese there is no future. The development of the economy depends entirely on relations with China. Derelict ex-collective farms have been taken over by Chinese. There are many mixed marriages and Chinese is the principal foreign language taught at school and university. Here, all Chinese speak Russian and the Russians know a few words of Chinese.

Generally this cohabitation is going well, although there are some who object to the "peaceful invasion". Many Russians are worried about their country becoming a "reservoir" of raw materials for their Chinese neighbour who buys their oil and exploits their forests and farmland. Others who are forced out of the labour market by the cheap and efficient Chinese workforce denounce them as a "yellow peril".

That xenophobic language is completely contradicted by the reality that the Russians need the Chinese here. In "Blago", they remember a time not so long ago when Chinese products helped the Russians to take the brunt of the post-Soviet transition. And today, it is thanks to Chinese entrepreneurs that the Russian economy is modernizing.

DISCLAIMER: Nothing here should be taken as personal advice, financial or otherwise. No liability is accepted for third-party content.
Posted by Sackerson at 10:52