Why, after 20 years' intemittent house arrest and other restrictions, was democracy campaigner Aung San Suu Kyi freed by the Burmese government?

Last night's BBC This World programme "Aung San Suu Kyi: The Choice" (viewable online until 29 September) sketched the postwar political history of Burma, viewed through the lens of the personal experience of Suu Kyi and her family and touching on the heavy emotional cost for them as well as her steely courage and wily pragmatism.

But neither pity nor admiration were the motive for the junta's rapprochement with her and her party, the National League for Democracy, according to a former figure in Burmese military intelligence who was deputy Ambassador to the USA. At 52:28 in the programme, Major Aung Linn Htut set the decision in its geopolitical context:

"Change is inevitable. The current military leadership knows that. Burma has fallen so far behind the rest of the world. China is swallowing us up economically. It's controlling us politically, too. Burma can only counter China's influence with the West's help. These changes are an attempt to redress the balance."

China and Burma are neighbours and have had periodic flareups since the thirteenth century. summarised by this article on BurmaNet. Post-World War Two, Burma defended itself against the Chinese Nationalist Kuomintang and then Chinese-sponsored domestic Communist subversives. When the latter failed, China switched to encouraging the growth of ethnic minority militias in Burma, which has bequeathed a poisonous legacy and unfinished business as far as the leadership is concerned. Aung Linn Htut's article continues:

Then in 1989, Kokang leader Peng Jiasheng followed Beijing’s advice and contacted Burmese Maj Than Aye, head of intelligence unit No. 9 based in Lashio, Kachin State, to discuss peace without disarmament. Lo Hsing Han, a former drug lord, served as a liaison between the two parties and a cease-fire deal was reached.

The Kokang offer was accepted by Burmese Gen Saw Maung and Brig-Gen Khin Nyunt, then the leaders of the State Law and Order Restoration Council (SLORC), with the approval of Ne Win, who had resigned his official post in 1988 but retained a great deal of influence over state affairs. Later, many armed ethnic armed groups based along the Sino-Burmese border followed the Kokang example and entered into cease-fire agreements with the SLORC.

Snr-Gen Than Shwe and Vice Snr-Gen Maung Aye, both holding the rank of Maj-Gen at the time, were not happy with the cease-fire agreements, but they dared not protest against deals entered into by their superiors. After taking office, however, Than Shwe used to say he was dealing with the Chinese not out of desire but because it was unavoidable. He never shook hands with leaders of cease-fire groups from the northeastern part of the country, and frequently told divisional and regional commanders at quarterly meetings that those groups would be attacked one day.

Read in this context, Suu Kyi's movement presented another opportunity for Beijing to undermine Burma's government:

After the National League for Democracy (NLD), led by pro-democracy leader Aung San Suu Kyi, won a landslide victory in the 1990 election, China was the first country to recognize the party’s victory by sending its ambassador to Burma to the NLD.

Then, he continues, there are the economic issues. China sold arms to Burma, who then failed to pay; international isolation drove Burma to give control over energy, mining and irrigation to Chinese companies. When China "became concerned about the plight of ethnic armed groups" on their joint border, her foreign minister tried to instruct the Burmese leader Than Shwe to deal with it, and he angrily threatened to change the route of oil and gas pipelines between the two countries; China backed off.

Aung Linn Htut's view is that Burma has to seek dialogue with the West in order to avoid being absorbed by China:

Based on an analysis of the past and present relations between the two countries, one can predict that China will be particularly dangerous for Burma in the future and the situation will be very worrisome for the Burmese people. Burmese military leaders, who may have thought they are good at the political game, have played China against the US and India, but they are now in a position to only follow whatever Beijing asks them to do. China has not only acquired many parts of Burma’s economy, it has to a certain extent dominated ethnic relations and culture.

Burma’s current military leaders, including Gen Min Aung Hlaing, the commander-in-chief of the armed forces, are reportedly not happy with the situation, but they do not know all the details of what their seniors previously did and agreed to do. As a result, they do not know what words and actions are right and wrong with respect to China, so they have to follow Than Shwe’s instructions. If they continue the way they are going, Burma will indeed become a part of China, or a Chinese colony, as many people say. Or the discontent of the Burmese people will grow and lead to anti-Chinese riots, which will end up in conflict between the two countries.

Potential conflicts over resources continue. For example, there is China's damming of the River Salween, which continues into Burma. Tibet is vital for China for a number of reasons but one of them is that whoever has Tibet controls several river systems running through East Asia. The 21st century could see an age of water wars. 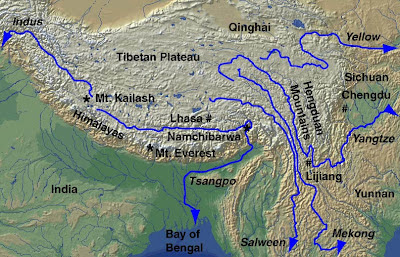 The British also have major business interests in Burma; and her natural gas and oil are another bone for the world's dogs to fight over.

Suu Kyi has been a bargaining chip that neo-imperialist China, Burma's tiger-by-the-tail military rulers and Western plutocrats have all tried to use, but if she plays her negotiable value as skilfully as Malta's Dom Mintoff she may succeed in benefitting her country in a way that none of the others has a reason to do.

DISCLAIMER: Nothing here should be taken as personal advice, financial or otherwise. No liability is accepted for third-party content.
Posted by Sackerson at 10:49