What's all the fuss about the Trans-Pacific Partnership?

What is the TPP? Some see it as a creeping plan to"privatise government" and (among other things) stifle the free exchange of information on the internet. There are protests against the secrecy surrounding the talks, and suspicions regarding the effect on small farming and food safety.

The Trans-Pacific Strategic Economic Partnership (TPP) began with four small nations in 2005. It was a sort of mini-free trade agreement.

But in July 2008, the Doha round of the World Trade Organisation stalled after a few days' talks in Geneva. This round had been going for almost seven years, without agreement. The blocking issue was how smaller nations could protect their agricultural base against massive foreign imports and aggressive price-undercutting by competitors. They wanted a "Special Safeguard Mechanism" (SSM)that would allow them to impose import tariffs.

The United States had already started talking to the TPP back in February 2008, ostensibly on the issue of financial services; now (September 2008) she declared her intention to apply for TPP membership. This was like an elephant joining four kids in their inflatable backyard pool: 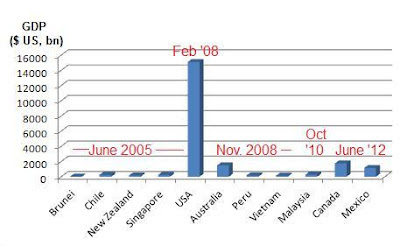 Perhaps the clue to the USA's interest is in her dominant position in agricultural exports (see Table 852 here): 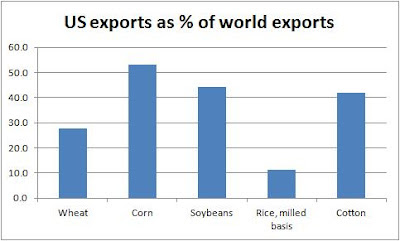 And if all applicants are accepted, then together they will have almost sealed-off the Eastern Pacific to non-members: 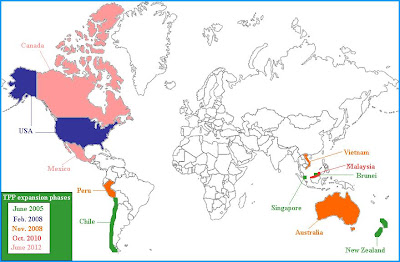 As America turns her face towards the East in the 21st century, this may become significant. Brooking Institution fellow Joshua Meltzer told a Congressional Committee in May, "The TPP has the potential to be the building block for a wider Free Trade Agreement of the Asia-Pacific Region (FTAAP)".

There are powerful players at work, and much smoke being created. Worldwide, but particularly in Africa, there is a rush to grab agricultural land. Protestors are arguing against the dispossession of small farmers; the World Bank counters the interests of producers, expressing its concern instead for poor urban consumers in this 2010 report:

"... we note that many of the main arguments in favor of the SSM focus on the well-being of vulnerable agricultural producers. Yet many rural residents in poor countries are net purchasers of food, and in many countries, urban poverty is growing ever more significant. In this context, the potential for policies based on the SSM rules to lessen poverty vulnerability seems very questionable. Future work should take into account the poverty dimension of the Special Safeguard Mechanism."
The food prices about which the World Bank is so concerned might be considerably lower if we did not have the harebrained scheme to use corn as a fuel substitute, and if we could keep speculators out of this market - one that could kill millions if trading gets out of hand. Professor Yaneer Bar-Yam recently did a study in Mexico concluding that those two factors have tripled the price of corn.
It is possible to see the TPP as a backdoor way in for Big Farmer and Big Pharma. The potential profits - and the power implicit in gaining control over food supplies- are irresistible. One does not have to be a conspiracy theorist to suspect that dirty deals are being done in the shadows.
A longer-term concern is what may ultimately happen when the world converts to mechanized and chemicalized methods of food production. There is a tradeoff between efficiency and sustainability. Initially, modern farming techniques (applied for example to the Guinea Savannah Belt that the UN's FAO is now eyeing) could create a period of abundance that may in turn encourage further population expansion. We shall then be dependent on this approach. What happens when this system is hit by fuel price hikes and supply hiccups, and soil quality deteriorates across the globe because of the vastly expanded (and profitable) use of pesticides, herbicides and fungicides in conjunction with crops genetically engineered to tolerate them? Is humanity set for a great leap and then - after some decades, or a century or two - a monstrous crash?


INVESTMENT DISCLOSURE: Mostly in cash (and index-linked National Savings Certificates), but now planning to build up some reserves of physical gold via regular saving.

DISCLAIMER: Nothing here should be taken as personal advice, financial or otherwise. No liability is accepted for third-party content.
Posted by Sackerson at 19:16

Wow, I didn't realize how dominant the US was in agriculture. But the biggest issue is the ethanol subsidies - I read somewhere that 40% of the corn crop in the States goes to ethanol.
agricultural investments